Which state has become more overrun by right-wing reactionaries, Kansas or Arizona? Amid national protests, Arizona Governor and immigration reactionary Jan Brewer veteoed a bill that would allow public businesses in the state the right to deny service to gays. It's hard to call the move an act of pragmatism or a change of heart; more than likely, the forfeiture of commerce and out-of-state revenue that this bill would've created was the likely X factor. When the NFL threatened to pull Super Bowl XLIX, just like they did 30 years ago, that might have been the final straw.

Unfortunately, these "gay Jim Crow" laws are growing quite common. As a rebuke of the many legal victories that LGBT activists enjoyed in 2012 and 2013, conservatives on the local and gubernatorial level are playing their hand. The law that Arizona shut down is close to passing in Kansas, and Idaho and Mississippi might follow suit. If these discriminatory acts pass, what have been a complicated series of legal battles are bound to get more convoluted. Are SB 1062 and its copycats really based on religious grounds, or just legalized bigotry?

Other notes from an eventful February:

+ Another Winter Olympics has come and gone. As it turned out, Sochi wasn't the polluted, psuedo-fascist hellscape that some (including myself) had feared, though as a venue it still left a lot of people underwhelmed. Considering how much was spent to spruce up the Russian resort town, perhaps it would be best if the Summer and Winter Olympics rotated exclusively between four or five different cities. Maybe LA, Tokyo, Athens, Sydney and/or London for the summer games, and Lake Placid, Albertville, Lillehammer, Nagano, and Reykjavik for the winter games? Maybe one city per continent? What are your thoughts?

+ My second attempt at producing a show went better than the first. I feel more confident in what I'm doing, and having a business partner to workshop ideas and split fees has been a boon. With that said, I'm proud to announce that we are in early talks for another run at the same theater in June 2014. If anyone is in or around Chicago on Sundays in the late Spring/early Summer, I'll keep you posted with more details. 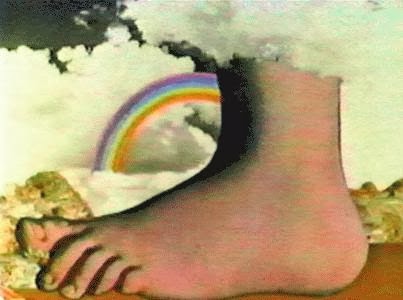 First in a series

I was the first person I knew that was into Monty Python. I discovered them around the time of my 9th birthday; in hindsight that might have been too young, but their singular impact on me was much too great to let age be a consideration. I remember watching the show's 20th anniversary special (several years after its first airing, mind you) one night on PBS and it struck my curiosity enough that I started renting tapes from Blockbuster a couple of days later. The absurdity and silliness was what lured me in; the intellectual undercurrent was what keep me watching. Where most of my peers discovered "Monty Python and the Holy Grail" a year or two after I did, my gateway was the original series.

For the first of my "Seasons of Love" essays, I have chosen the second and arguably most immaculate season of Monty Python's Flying Circus. If MPFC instigated the "classic rock" era of British comedy, than the second series is Led Zeppelin II, Exile on Main Street, and Who's Next rolled into one. All thirteen episodes are A-quality or very close to it; I can count the number of sketches and bits I didn't like on one hand. If the first series set the tone for breaking conventions and destroying the familiar, year two reinforced the anarchy. The sweet spot between surreal interference and coherent set-pieces is hit more regularly, and without getting pummeled. The chaos is more fluid, more focused, and just about seamless. Where the third and fourth series grow increasingly hit and miss (especially after John Cleese's departure) the second series is peak Python.

To understand Monty Python at the peak of its powers is to see how the show's talent took specific roles and played that part to the hilt. John Cleese, the alpha male; Graham Chapman, the straight man; Eric Idle, cheeky and playful; Michael Palin, alternately nice and smarmy; Terry Jones, the pompous pushover; and Terry Gilliam, taciturn yet feral. Writing and creating their own material, the Pythons had totally different personalities: Cleese and Chapman collaborated on sketches that mixed foibles and juxtaposition; Palin and Jones co-wrote longer sketches that turned into meandering character studies; Idle kept it short and silly. The spine of the zaniness was Gilliam's intricate animation fills, stop-motion cutouts mixed with zaftig, macabre caricatures.

To bring home my point, here are (in chronological order) the five strongest episodes of season two:

"Face the Press," episode one of the season, 14th overall. Best known for "Ministry of Silly Walks," one of the few overly physical sketches in the Python canon, "Press" also features the Piranaha Brothers documentary spoof, which consumes the final third of the episode. A gag involving an absurd number of deliverymen installing a new gas cooker (er, oven) gives the season premiere a figurative and literally serpentine runner to bring everything together. "Dinsdale!"

"The Spanish Inquisition," episode two, 15th overall. AV Club suggested this as your Python Gateway to Geekery, and I can't disagree.  Palin is aces as the hapless Cardinal Ximenez, turning the titular 15th century religious persecution into feckless, mustache-twirling villainy. They aim for evil, but they settle for mild annoyance. Beyond the inquisition this is just a collection of sketch great sketches, including "The Semaphore Version of Wuthering Heights" and "Tax on Thingy."

"It's a Living," episode six, 19th overall. There's no recurring theme or wraparound this time, it's just a great series of sketches. "Timmy Williams' Coffee Time" is a dead-on parody of David Frost, a bite-the-hand-that-feeds moment for an early champion of Python's work. The final quarter of the episode is again dedicated a lengthier piece, a send-up of live election coverage --a Party Political Broadcast, if you will-- that pits the Silly Party against the Sensible Party.

"Spam," episode 12, 25th overall. Any Python fan worth their salt knows the title sketch and its accompanying sing-along, but this is another top-to-bottom cavalcade of scenes. "Ypres 1914" evokes Ernest Hemingway and features a great individual performance from Chapman. "Dirty Hungarian Phrasebook" is fairly quotable, and "Communist Quiz" and "Gumby Flower Arranging" later became staples of Python's live act.

"Royal Episode 13," 26th overall. "The Queen is watching," the show's announcer warns upfront. Any assumption that Python will play it safe is thrown out almost immediately; the tasteless "Cannibal Lifeboat" sketch segues into the even more abhorrent "Cannibal Undertaker" sketch, and gross-out humor dominates the proceedings. Inspired as it may have been, the perceived limits of good taste forced the BBC's censors to pay closer attention. There was a limit to what Monty Python could get away with after all.

Of course, by choosing five episodes from one season I can't touch every base. The other eight episodes of Python's second series have all sorts of great sketches, ranging from the game show spoof "Blackmail" to "The Killer Cars" to "How Not to Be Seen." "Scott of the Antarctic," perhaps the weakest episode of the season, is a tad arch and slow-moving at times, but its strongest elements trump the weaknesses. Regardless, whenever someone watches "Holy Grail" or "Life of Brian" want to know where to go next, season two is normally where I steer them.

With any luck, "Seasons of Love" will turn into a monthly feature on this blog. There are plenty of shows I like, past and present, that are worth writing about; at the same time, I'm also open to suggestions.

The Curious Case of the Erstwhile Editor

For reasons that are unclear to me, I had been unable to access private messaging or the forums at TV.com, a situation that dragged on for nearly two weeks. At first I thought I was suspended under unknown pretenses; I had not logged in for a week in October 2013 (partially because of work, but also my family health situation) and was let off with a warning. However, there was hardly a strike two, let alone a strike three. I can't access the forums, or send private messages, or make any submissions outside of cast and crew credits. I had to ask my friends Charlene (aka IndianaMom) and Terence (algetrig91) to play go-between with the site admins, and they forwarded me the tech support e-mail. It took a few days, but the problem is resolved. Fellow TV.commers: I'm back on track.

+ Family Update: as of Thursday, February 6th my father's cancer is completely gone. There's a slim possibility that it may return, but right now it's completely out of his system. Granted, he's still physically weak and he's regained only a scintilla of his vision in one eye, but it's a step forward.

+ I think the Super Bowl ad that offended me the most was the one where they put ketchup on a hot dog.

+ Everything about the Sochi Olympics is a mess, and the games have barely started. The animal cruelty, the anti-gay propaganda laws, the lackadasical preparation, the fact that Vladimir Putin has his hand in just about everything. Rest assured, Russia will not host another Olympics for a long, long time.