After that mysterious AIM flare-up in late 2005, I went cold turkey in communicating with "Daisy." Not long after I was dumped by Babs (click here for that story) in August 2006, almost by coincidence Daisy reached out on Yahoo Messenger. Daisy had now been seeing the divorced dad for almost a year, and living with him about nine months. I asked about what happened in late 2005, but she wouldn't give me a straight answer. We became Facebook friends and swapped recent photos. A day later, Daisy randomly asked if she could borrow 10 dollars for cigarettes. I explained that I was neither in the Chicago area nor did I have much cash. She thought that was a strange excuse. After three days of on/off small talk, she got upset again, for something else entirely. For a second time, I had to go through the archived conversation and figure what I said, and I could not figure out what I typed that triggered her. Again, I thought it was best to just leave her alone.

We barely communicated over the decade or so. She got married to the divorced dad in May 2010,  and between that 2006 convo and 2011 Daisy and I had two, short nondescript Yahoo Messenger convos. In the interim, she deleted and rejoined Facebook at least twice, though only once did I send a friend request. For about four years after that, more radio silence.

In September 2015, Daisy came up yet again as an FB friend suggestion. I hesistated for a couple weeks, but I sent a request. She approved it a day or two later, than followed me on Instagram as well. She had just finalized an ugly divorce with her husband, and asked if I was free to meet for coffee. I agreed, and after all this time we met up at a local Starbucks. I mentioned a social group I was part of, and she was interested in more information. She also made it clear she was seeing someone; this was just friends meeting. We agreed to meet up a few days later, but when I arrived at our meeting place, she didn't show.

I didn't hear anything for two days, then she texted to say she overslept. Then I tried to Skype her, but then she apparently blocked me there and on Facebook. About a month later, she texted to apologize, then asked if I was free for coffee again. I obliged, we hung out for a couple of hours, she unblocked me on social media, then agreed to meet again on Black Friday. The day after Thanksgiving that year was a cold, dreary day; I basically sat uncomfortably in my car in 35-degree sleet waiting for her to arrive. Over the next 45 minutes I left one Facebook message, one text, and one voice mail. I drove home to find I was blocked on FB again.

I figured that was the end, but in Summer 2018 she texted out of the blue. Daisy finally apologized; she was in a tough place because of the divorce and was also battling severe anxiety. She was out in Plainfield, with a new job and a new live-in boyfriend. We texted on and off for the second half of that year, but never made any attempt at meeting up. Two messages I sent in late 2018 went without a response, then I just let her be until earlier this year.

This all started with my sister, and Daisy sent an FB request to her. I wasn't sure if I had her current contact info, so I messaged Daisy on LinkedIn. We had a polite conversation that night and the next, then agreed to meet at the same Starbucks on the third day. It was like deja vu; I arrived right on time, and she flaked out. Again, I left a text and voice mail. That Saturday, I asked how she was doing, and this is how she replied: 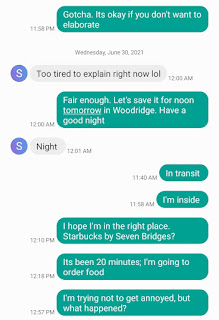 If you've read all of this, you're probably wondering why I communicated with this woman like a moth to a light? In hindsight, I'm not sure; the 2004 me was probably thinking about sex, whereas the 2015 and 2021 me simply wanted to reconnect. I was also probably too patient with someone who (I'm speculating) has a history of mental illness. Anything beyond that and I'm probably letting my imagination run wild. This whole 17-year experience left me feeling gullible and a little used. I could have easily done some things differently. As much as I love the idea of reconnecting with people I haven't seen or heard from in years, Daisy demonstrated that sometimes the mystery isn't worth it.

2021 so far hasn't been much better than 2020. The struggles and challenges are the same, but they've evolved and in some ways mutated. It's becoming apparent that COVID-19 is something we might have to just live with, like the flu. Variants keep emerging, and it's likely contributed to the ongoing labor shortage. In times like these, we have to remember our blessings.

For my 17th annual "thanks/no thanks" list, I say thank you to my Amazon Echo Dot for introducing me to radio stations all across the world. On the other hand, I say no thanks to... well, everything else Amazon. I am thankful for being able to see friends in person again. I am not as thankful to people who won't get the damn vaccine or still think this is all blown out of proportion. I am grateful for consistant work. I am not as grateful to businesses that keep underpaying or marginalizing their employees, then cry poor when they do raise salaries.

If I post "random notes" about once a month, your eyes are not deceiving:

+ I won't lie, President Biden had a rough August and September. Like, fifth-year-in-a-two-term-presidency rough. Compared to Dubya (2005; Katrina and Iraq) and Obama (2013; the botched ACA rollout) these have been miscues but not yet administration-defining fiascos. As far as Afghanistan is concerned, we had been going in circles for awhile; if we learned anything from three administrations ago, a financial surge wasn't going to win this once and for all. COVID has proven tough to defeat as well, and the economy has been sluggish. However, in those regards there's still plenty of time to turn things around.

+ The house in Downers is almost sold. After spending a fair chunk of my spring and summer cleaning and reorganizing --right up to this week, really-- the burden is almost off our shoulders. My sister is working with a realtor that she knows from high school, and we're on the hook for some minor repairs (wiring and foundation).

+ After barely working this summer --the house was a massive undertaking-- I've taken on a long-term substitute teaching gig. It's double my normal rate, which will definitely help alleviate some credit card debt.

Next time (whenever that is) the conclusion of the Daisy saga.

A couple months ago, I lamented being disconnected from old friends.  Even with the pandemic and the Delta variant making my willingness waver, I've been easing back into my often elusive yet perpetual goal to reconnect. I've largely played this aspect safe; I've been to two get-togethers with fellow improvisers, but most of the attendees were people I last saw just before quarantine. Still, I had one experience this summer that validated my hesitation.

I was first acquainted with "Daisy" in high school. We were on the homecoming committee together, though I don't recall ever interacting with her. Sometime in Spring 2004, less than a year after I graduated high school, Daisy reached out to my sister via AIM. My sister told me Daisy wanted to chat with me on messenger, so we exchanged screen names. During our convo, Daisy said she had a crush on me, but never worked up the nerve to say anything. I was flattered --I didn't date in high school much-- and found some common ground. Soon after, we agreed to meet up for lunch the next week.

I arrived 10 minutes early at the Subway in downtown Downers Grove. I waited nearly a half-hour for Daisy to arrive before deciding to buy lunch without her. I tried to reach out on AIM and ask what happened, but she didn't log in for several weeks. About a month later, she messaged me to explain what happened: she had a falling out with her mom, and was now living in a trailer park with a guy she was dating. I didn't know how to process this, as I was under the impression that we were supposed to be on a date five weeks prior. We had another long conversation, but out of fear of alienating my "crush," at no point did I clarify the intent of that lunch meet-up.

Communication remained sporadic throughout 2004 and 2005. Her father, a college professor in North Carolina, arranged to have her live at a Ronald McDonald House for a spell, for reasons unclear. Daisy got engaged to the trailer park guy, but soon broke it off, citing his perceived anger problem. (If you're wondering, this all happened between her 19th and 20th birthdays.)

There was another stretch of radio silence until December 2005, when Daisy reached out again on AIM. She said she was back in Illinois, living with a recent divorcee that she meet two months prior. I'm not sure what happened, and my best guess is that I misinterpreted something I said or some awkward turn of phrase. After 20 minutes of small talk, she suddenly flipped on me. I couldn't tell what was going on, but I apologized profusely. It wasn't I was apologizing for either, but I was taken aback by how livid she was. Not long after, she messaged "W/E" (whatever) and logged out. Either way, I was disappointed that I might never hear from Daisy again. I did... but that's a story for another time. 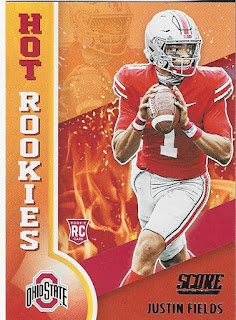 It's pro football season yet again, with an extra game added this year on top of the expanded playoff format introduced in 2020. I'm cutting to the chase, because no one reads this introductory paragraph. I break it down, 17 syllables at a time:

Hello everyone! My Facebook comedy page turns eight this week, and I am announcing the revival of a contest from last year. Also, a rare opportunity for my blog readers to see and hear yours truly: