I wanted this last blog post of 2018 to be reflective, but I didn't to repeat myself or rehash something from my previous 35 posts from this year. Instead, I'll share an anecdote that sums up my year:

I had been Lyft driving for a couple of weeks. I became a licensed Lyft driver in August 2017, but really hadn't ride-shared in earnest until June of this year. I was hovering around downtown Naperville around 11pm, when I picked up a very drunk man at an upscale bar. He stumbled into the car, barely said a word, and whatever he did say was slurred. It was a 30-minute ride from Naperville to Montgomery, and I was genuinely concerned that he was going to vomit in my back seat.

At the end of this decidedly quiet ride, the passenger asked me to drop him off in front of the house rather than in the driveway. The house was in the middle of a gorgeous subdivision that couldn't have been more than a decade old. He mumbled "thank you," then walked out of the car and into the night. I drove half a block up, then parked to turn off my app and check messages. Just as I was about to drive out of the subdivision, the passenger was walking down the sidewalk. As I made a left, he came within inches of my car. My best guess is, he tried to walk of his stupor, but he was still pretty wasted. I'm relieved that I didn't hit him.

Where others struggled, I had a so-so 2018. I checked off some bucket list items, but I didn't make that many inroads as far as professional pursuits go. (Thanks, writer's block.) Onward and upward to 2019.

In trying times, music is an outlet. From a progressive and cultural standpoint, if 2016 was a gauntlet, then 2017 and '18 were just as bad if not worse. Popular music turns into a reflection of our struggles, both a source of relief and catharsis. Some of us won't readily admit it, but we needed music this year. Even if it was white noise to drown out a phalanx of bad news, 2018 was a good year to get engaged in new artists and new albums. All of my top picks, however are established musicians whose work soared to dizzying heights.

NOTE: I acknowledge that my jazz top ten is unfairly devoid of Wayne Shorter's 3-CD set Emanon. In spite of gushing reviews and positive word of mouth, the album is not on Spotify, and I have not had the opportunity to buy the box set online. Hopefully, Emanon will the best 2018 recording that I first listened to in '19.

1. 7, Beach House. My top pick in 2012 sort of slipped under the radar with 2015's almost-as-stellar Depression Cherry, but their seventh album is by no means a resurgence. Rather, its a new direction; the core duo of Victoria Legrand and Alex Scally have put out their most collaborative, unpredictable, and extroverted work yet. Multiple listens helps you peel away the fascinating layers of their shoegaze-adjacent sound.
2. Hell-On, Neko Case. Music as feminist catharsis. Since her last solo effort, we've heard two so-so New Pornographers albums and an otherwise winning collaboration with Laura Veirs and k.d. lang that didn't use her to best effect. Hell-On reminds us how relevant and urgent Case is as a standalone singer-songwriter. Her voice is warm and engaging, emotional without getting histrionic, and the production is both atmospheric and detailed.
3. Freedom's Goblin, Ty Segall. As loopy as he is prolific, Segall's decade-long saunter through fuzz-rock freak-outs and funky deconstructions reached an apex on Goblin, his first of three (!) solo releases this year. Everything has built up to this, it seems; a master's thesis of noisy, malevolent guitar that bounces around every era of rock n' roll. Come for the distinct tuneful sensibility fully realized, stay for the Fred Armisen cameo.
4. Care For Me, Saba
5. Twin Fantasy (Face to Face), Car Seat Headrest

11. I Can Feel You Creep Into My Private Life, TuNe-YaRdS
12. All Nerve, The Breeders
13. In a Poem Unlimited, U.S. Girls
14. Wide Awake!, Parquet Courts
15. Tell Me How You Really Feel, Courtney Barnett

1. Heaven and Earth, Kamasi Washington. Of course Kamasi is on top of this list again. He's built a reputation for releasing albums that are gloriously busy, take an entire afternoon to digest, and thoroughly important. His second full-length (emphasis on full) is the first recorded in Trump's America, where racism has lept from subtext to context and uncertainty is everywhere. He doesn't spare a second or waste a note, and for that we must keep basking in Kamasi's genius.
2. The Window, Cecile McLorin Salvant
3. Contra La Indecision, Bobo Stenson Trio
4. Seymour Reads the Constitution! Brad Mehldau Trio
5. Music IS, Bill Frisell
6. Love Stone, JD Allen
7. Pay for It on the Other Side, Pete McCann
8. Full Tilt, Adam Shulman Sextet
9. On the Brink of a Lovely Song, Christina Von Bulow
10. Full Circle, Eddie Palmieri


BEST METAL ALBUM: The Sciences, Sleep. The first new release from Sleep in nearly 20 years was well worth the wait. Its six tracks of all-killer, no-filler sludge metal with a 420 bent, a proggy romp on par with their 1999 opus Dopesmoker.
Honorable Mention: Stranger Fruit, Zeal & Ardor.

BEST SINGLES (in no order)

1. "This is America," Childish Gambino. Everyone and their aunt has watched this clip. There's nothing I can add that hasn't already been said. Wow.
2. "MALAMENTE (Cap.1: Augurio)," Rosalía. The Catalan answer to Beyonce (and maybe M.I.A.) crafted a modern visual stunner for her distinct blend of flamenco and hip-hop. Even if the lyrics are difficult to comprehend, the mashup of imagery is mesmorizing.
3. "APE***T," The Carters. There's nothing subtle about this. Then again, Bey and Hova aren't introverts. This flaming hot take on blackness in Western colonialism, layered in meticulous chereography, launched a thousand think pieces and sure to ignite quite a few more dissertations.
4. "thank u, next," Ariana Grande. What I said about Gambino's video mostly applies here. This is both a fun romp and a statement of artistic maturity.
5. "Pa'lante," Hungry for the Riff-Raff. Washington's response to Hurricane Maria and the devastation of Puerto Rico was a joke. Music can cleanse the soul, though food, shelter, and clean water would be nice, too.
6. "Everybody Wants to Be Famous," Superorganism. Being YouTube famous is not all that its cracked up to be. Let a 19-year-old college kid from Maine (and her 30-something band mates) explain why.
7. "Oh Baby," LCD Soundsystem. Thanks to the miniseries "Castle Rock" (among other projects) 2018 was a renaissance for legendary actress Sissy Spacek. This sci-fi collab with David Strathairn and director Rian Johnson was another strong performance, albeit far more below the radar.
8. "Send Me," No Age. Welcome to corporate hell!
9. "Walk It Talk It," Migos feat. Drake. Offset et al. bridge a gap between '70s soul and 2010s trap that we didn't know existed.
10. "Hard World," YACHT. Inspired by the rotating Happy Foot/Sad Foot on Sunset Boulevard (and its ensuing superstition), you assume these bipedal neighbors couldn't have more disparate days until an appreciated moment of levity at the end.

Honorable Mentions: "Stereo L," Daniel Avery. It plays and sounds like a gibberish version of the old school "Doctor Who" opening theme. Hypnotic. "PYNK," Janelle Monae. The video looks like a lost collaboration between Georgia O'Keeffe and Robert Heinlein, by way of Prince.

What are your thoughts? I'd love to hear from you.

The Ghosts of Conservatism, Past and Present

(Ed. note: please forgive the delay. I've been having issues with my laptop.)

George Herbert Walker Bush left a mixed legacy. Nearly every good deed he committed as a public servant was cancelled out by something shortsighted or outright bad. The first time I ever really paid attention to politics was when Bush ran for reelection in 1992. His one term in office was "Reagan lite"; depending on how you look at it, that could be praise or disdain. He was a throwback to a time when politics weren't personality-driven (read: boring) and there was a place in the GOP for moderates and centrists. History will remember him as a middle-of-the-pack president: not a failure, but not a man who defined a generation of Americans, either. He was competent, which was more than we can ask for now.

The memorial in DC earlier this month was only allegedly anti-Trump. Rather, the service reminded people of positive character traits that Bush 41 had that the current president seems to lack, without calling Trump out by name. It was a subtle compare and contrast: an okay presidency alongside one rife with division. 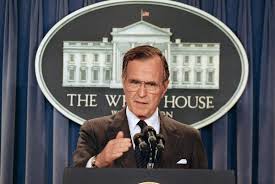