About two weeks ago, I received a generic, junk mail subscription offer for ESPN the Magazine. I tend to receive this sort of thing fairly often; I still subscribe to about a half-dozen magazines, but these nondescript envelopes usually offer a deal on something I don't read (People Weekly) or I don't have time for anymore (National Geographic). I was about to put the offer in the trash when I decided to skim the new issue of ESPN Mag. I stumbled upon a letter from the editor, where she declared unanticipated that this would be the last print issue. Gobsmacked by the odd timing, I took a picture of the letter and the junk mail side by side and posted it on Instagram.

I've written about my admittedly archaic reading habits periodically (pun intended). The contraction of the print industry is hardly anything new; newspapers and magazines alike have been gradually shrinking in every way since at least the mid-2000s. The ad revenue has been siphoned off by the internet, and paywalls have only been somewhat effective in keeping the old standbys alive. Yet the demise of ESPN Mag still kind of stings.

I like Sports Illustrated, and I respect its history, yet I've never been compelled to subscribe to SI. If a recent issue is sitting in a waiting room, I will definitely skim through it. At the same time, there was a period in the mid-2000s where I adored ESPN Mag. I'll even argue that for a five-year stretch or so, the overall quality of journalism was superior fo SI. That ESPN Mag was published every other week made it feel even more special. Once time in jest, I referred to ESPN Mag as my sports bible. My college girlfriend did not find that amusing.

For a time, a good percentage of ESPN Mag's content was generated by the network personalities themselves. Everyone from Dan Patrick to Stuart Scott to Stephen A. Smith had a column or regular feature. The vibe was young and freewheeling, yet exhaustively detailed. When ad revenue began to taper off in the early 2010s --and Scott's health went into dramatic decline-- those departments were phased out, and the Mag became a champion of sabermetrics. The top-notch sports-writing was still there, but you had to sift through articles about Mike Trout's WAR and LeBron James' FTA first. It became a more "woke" magazine too; exposes of discrimination and misogyny were balanced out by the sex-positive, annual Body Issue. 26 issues a year was reduced to 24 (they would sit out the month of January) then the Mag quietly became a monthly in Fall 2018.

ESPN can still lay claim to being the worldwide leader in sports, but they've lost grip on their once massive foothold. There are rival sports channels on cable, plus streaming platforms. In the print world, Sports Illustrated was challenged but never vanquished; unless you count The Sporting News or those myriad annual fantasy sports previews, SI has now stumbled into a monopoly. The Mag is its most notable casualty so far. The game was won, but the series was lost. 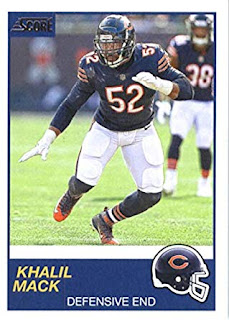 If you recall from last year, my 2018 preview nailed it. Don't underestimate the brevity of my pigskin forecast. Regardless, its a new season and a clean slate, and I'm breaking it down 17 soma at a time.