I'll keep this short and sweet: any NFL player that prefers to kneel in protest shouldn't have to explain why they're kneeling. We have a president that is doing far more to divide than unite, race relations in the U.S. are at a nadir I haven't seen in my lifetime, and police brutality is still going unresolved in most metropolitan areas. The idea of locking arms in solidarity feels like a cop-out and an unnecessary point of compromise. 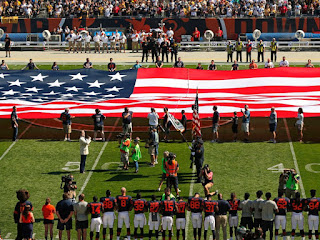 About four years ago, I discussed how I all but sabotaged my friendship with "Sandra," whom I met in high school. Even though we kept a distance, we remained Facebook friends. Since I first wrote about her over four years ago, she had a daughter and got married (in that order). I not only avoided interacting with her, but also her social circle, which I found problematic.

Less than a year after that post, Sandra gave birth to her daughter, then married the father of the child; the nuptials were postponed until after she had the baby. The Friday before the wedding, she posted something on Facebook about a get-together at a restaurant in Logan Square. I messaged her to ask if I would be welcome; the message was time-stamped (which means she saw it) but she didn't reply. I assumed that the freeze-out was still on, and I stayed home that night.

In early 2016, Sandra invited me to her 30th birthday party. It was the first time she had reached out to me in any way, shape or form in nearly five years. I appreciated the invite, but obviously I had a lot of trepidation; on top of that, I already had plans out of town that weekend. I sent her an email sending my regrets and concerns; to my astonishment, she replied to clarify that I was definitely welcome. I responded by asking if we could meet one on one and finally talk things out, but she said her itinerary for her Chicago trip was already full.

No leeway was made --and contact remained minimal-- until this past June. Sandra was coming back to town, and sent out an invite for a group dinner. I still would have preferred meeting one on one, but I accepted the invite anyway. Around this time, Sandra teased some big news on Facebook, and was supposed to be an imminent announcement took several weeks. The trepidation returned, and my anxiety grew as the date of the get-together neared. When I drove to the restaurant, I found a spot at the bar and polished off a beer to calm my nerves.

Sandra arrived with Kori, a mutual longtime friend. I had known Kori since grade school, but hadn't seen her since 2011 or so. I vaguely recalled that Kori had unfriended me on Facebook; we had talking things out, she readded me, then disappeared from FB altogether shortly after that. She had always been cagey and a little hard to read, so part of me wondered if I had been blocked.

Sandra's major announcement was that her young family was moving from San Diego to Columbus, OH. I thanked her for clarifying, and that ended up being the last interaction we had for nearly an hour. I attempted to catch up with Kori, partially to impose some goodwill but also to feel at ease. The conversation tapped out after about five minutes, and after struggling to latch onto another conversation at the table, I spent most of the evening eating fish tacos in relative silence. (The fact that the tacos were outstanding almost feels like an afterthought.) After getting some ice cream, Kori drove a drunk Sandra back to her hotel.

I left Oak Park feeling annoyed. I figured that Sandra was tired, and she would touch base in a day or two, but it never happened. Later in the week, I shared a picture of my dog (a onetime obsession of hers) but it didn't elicit a response. Against my better judgment, I let the events of the night circle around my head; I was baffled that Sandra would invite me out for dinner, but barely start a conversation. Was it circumstance or more passive-aggression?

Perhaps against better judgment, six weeks later I wrote Sandra another long email. I mentioned how disappointed I was that we barely spoke, and that I was open to talking by phone or Skype. I didn't get a reply, so two weeks after that I messaged her on Facebook. After waiting awhile after that, I made an unpleasant discovery: I had been "half-blocked." We were still FB friends, but I couldn't see anything on her profile besides her basic info. What I feared would happen years ago finally did.

If this is the end, I accept those terms. In my subconscious, the nightmare from eight years ago still engulfs me. Sandra attempted to reconnect, and still couldn't make a conscious effort. I feel tempted send one more email, partially to apologize for overreacting and also because I have nothing to lose. Maybe in a few months, but definitely not now.

So much to say, so little time:

+ It took a hurricane or two to finally get the Trump controversies off the front page. For better or worse, its a diversion; Hurricane Harvey was an astonishing tragedy, one of larger scope than Katrina but better managed, and the aftermath might linger on for a decade. Hurricane Irma, hammering Florida as I write this, could be just as bad. President Trump is probably grateful to not be hounded by the Russian collusion controversy (among other things) at least for a moment.

+ I'm going to be somewhat disappointed if this is the end of the Moose/Hos/Alcides/Lo-Cain era in Kansas City. All four are pending free agents, and any attempt at making one last playoff push with this core group has sputtered. My Royals are playing .500 ball when we should be right in the thick of things. On one hand, we've set a team record for home runs in a season where MLB overall has seen an uptick in power stats; on the other hand, our pitching has been pedestrian. We'll be okay in the long run, but I don't want to wait 28 years for another title run.

+ While I'm glad the summer is over, the stress continues. I'm back to working as a substitute teacher after spending 2 1/2 months mostly at home, so I'm relieved that I don't have to dip into inheritance and rainy-day money much longer. I also have a temp position lined up that, if all goes to plan, will keep me steadily employed for about three months. On the other hand, I'm the executor of my mother's estate and I'm still wading through paperwork. My aspiration is to finally move out of my parents' house by November 1st, but money is still an X-factor.