The end of May offers two milestones for me, one slight and one substantial, yet both unfortunate. This past May 19th would have been my 10th anniversary at Salem Communications, an experience that I looked back on in 2011 and 2015. I acknowledged the milestone by texting my old boss (see image below) and briefly looking back at the bullet that I dodged. I am still in regular contact with two other people from that office. Nearly everyone else can stay in the past.

My mother has been dead for one year. It has a mercurial, up and down year of transition for my sister and I, but we move forward. It seems oddly fitting that I would spend this somber anniversary in Omaha, Nebraska, where I found out my mother had passed. I take solace in the fact that I had fun at the improv festival, just as my mother would have wished during last year's trip. I reconnected with a high school friend, while establishing new professional relationships with other improvisers. My sister stayed at home, taking care of the garden that my mother used to spend countless hot afternoons. Even though she visited my mother's grave on Sunday, neither of us felt inclined to dwell.

My relationship with my mother could be contentious at times, but I think about her almost daily. I tried to be as supportive and considerate as possible in those last few years, but I bristled at times as she grew increasingly needy and fragile. Her love was unconditional and unwavering --as any mom should be-- even when it felt smothering and overprotective. Even though my mother was front and center with taking care of my grandmother, there were often instances in the last five years or so where my sister had to juggle Grandma and both of our ill parents. When mom passed last May 27th, it was like a weird burden had been taken off our shoulders. Her parting gift was letting my sister and I move on. 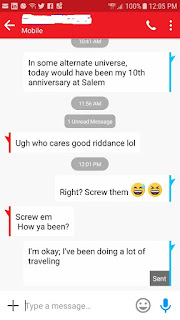 Next Week: my 13th annual fantasy Emmy ballot.
Posted by Stuart A. at 11:53 PM No comments:

Through a Freshman's Eyes: Millennium Edition

[Ed. note: I'm doing this a little earlier than usual this year. You'll see why in my next post.]

Another graduation season looms. For the eighth year in a row, and as the time gap between my high school graduation and this year's class widens, I am reminded not only of my lurching obsolescence, but also the variance in perspective. The scary part, and something to bear in mind as you read this year's list, is that the current crop of high school seniors have no recollection of the 20th century. In fact, about two-thirds of them were born after Saturday, January 1st, 2000.

With that said, if you are a graduating senior...

...Bashar al-Assad has always been President of Syria.
...Vladimir Putin has always been "President" of Russia.
...Elián González has always lived in Cuba.
...Hillary Clinton has always been the politician in the family.
...your parents' PC has never had issues with being "compliant."
...you have vague childhood memories of a phone-like device called a Blackberry.
...music has always been downloadable, and with relative ease.
...Amazon has always been eating away at brick-and-mortar retail stores.
...there have always been internet-only movies. (click here)
...online dating, blogging, flash drives and GPS have always been a thing.
...they have never read LIFE magazine.
...the Pyrenean ibex has always been extinct.
...the comic strip "Peanuts" has always been in repeats (applies only to anyone under age 18 that has ever read a newspaper).
...you've never seen the original lineup of Smashing Pumpkins or Screaming Trees play live.
...Prince has never been referred to as "The Artist" or by an incomprehensible symbol.
...there have always been Latin Grammys.
...Madonna has always been faking a British accent.
...reality shows have always dominated network television.
...its always been okay for two men to kiss on network television.
...you have never watched TGIF.
...Regis Philbin and Kathie Lee Gifford have never hosted a talk show together.
...David Letterman has always been the survivor of quintuple-bypass surgery.
...Vince Carter, Dirk Nowitski, and Manu Ginóbili have always played in the NBA.
...Tom Brady, Adam Vinatieri, Phil Dawson, and Sebastian Janikowski have always played in the NFL.
...Matt Cullen and Zdeno Chara have always played in the NHL.
...Adrian Beltre has always played third base in the majors.
...Bartolo Colon has not only always been a Major League pitcher, but he's always been on the chunky side.
...speaking of MLB, the National and American Leagues have never been seperate legal entities.
...Catfish Hunter, Allen Funt, Wilt Chamberlain, Payne Stewart, Walter Payton, Madeline Kahn, Mary Kay Bergman, Rick Danko, Curtis Mayfield, "Q" from the James Bond movies, Clayton Moore, Nat Adderley, Don Martin, Bob Lemon, Hedy Lamarr, Doug Henning, Charles M. Schulz, Sid Abel, Derrick Thomas, the guy from the Ernest movies, Lee Petty, Adam Petty, Larry Linville, Douglas Fairbanks Jr, Sir John Gielgud, Johnnie Taylor, Nancy Marchand, David Tomlinson, Walter Matthau, Sir Alec Guinness, and Carl Barks have always been dead.

Both my sister and I have been using our newfound free time (and inheritance money) to travel. Its been a long-festering goal and I'm taking advantage of it:

In late March, I flew to Austin, TX for a film shoot. I used to collaborate on short films with a guy named Brandon; when he couldn't afford to live in Chicago anymore, he moved back to his hometown of Houston, but resettled in the state capital. Some of you may recall I promoted his Indiegogo in mid-March; it only hit 38% of its goal, but he's been doing more with less. Brandon and his crew have been rather clever about shooting around his house, the neighborhood/subdivision that he lives in, and a smattering of other locations.

The film itself is a high school coming-of-age comedy/bildungsroman about three high school seniors plotting the perfect graduation prank. My character was originally intended to be in one scene; he was supposed to assist the boys with a botched prank early on in the film. That scene went well enough that just before I flew back, we improvised a second scene with the lead and another actor. One more for the IMDb, I suppose.

Then last week, my improv duo Flower Shop Bangers flew to Baltimore for the Charm City Comedy Festival. Even though we had played out of Illinois before, this was the Bangers' first festival that required a plane ride. We flew in that Tuesday night, spent Wednesday doing some tourist stuff, performed that evening, then went back to hitting up recommended locales until we flew back on Friday. We were impressed enough by B'More that we applied for the Baltimore Improv Festival in late July. FSB will hit the road again for our third trip to Omaha on Memorial Day weekend.