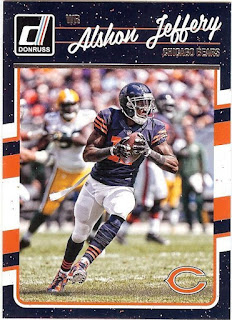 With bated breath, the 2016 NFL season kicks off on Thursday, September 8th with a Super Bowl 50 rematch of the Broncos and Panthers. This year should be a fun with one; its fairly obvious who will be the last four teams in the NFC playoffs, but a Manning-less Denver team and a suspended Tom Brady makes for (at least, in September) a wide open AFC. We Beloveds fans are keeping expectations modest; the last two Bears teams to start the preseason 0-3 made the playoffs, so we'll believe what comes out of this bunch when we see it.

The biggest change in the NFL this offseason --at least, in my opinion-- was Panini America's exclusive trading card deal. Topps' six-decade association with the league, which almost mirrors the entire modern history of football cards, ended with all the randomness of a coin flip. Panini (which bought out Donruss in 2009) puts out a quality product, but it just won't be the same.

This week marks two anniversaries for me, one external and one deeply personal. On August 21st, 2006 Facebook introduced the news feed to its home page; rather than have to go from one friend's profile to another to get updates, they were now all in one convenient location. It was polarizing and divisive at first --I can think of at least two Facebook friends that deleted their profiles because of the innovation, and never came back-- but now you can't imagine Facebook without it.

On the same day, sometime around 9 AM, I changed my relationship status from "in a relationship" to "single" and haven't changed it since. That is not to say I haven't been dating in ten years, I simply haven't changed my status. It was the first thing I contributed to anyone of my then 100-plus Facebook friends' news feeds, and that is a rather ignoble thing to admit. At the same time, this anomaly on my profile is a stark reminder of the first and most dysfunctional relationship I've ever been in.

I first met "Babs" on my third day on campus. I had just transferred from College of DuPage to Illinois State University, spending the long weekend getting acclimated to my new surroundings. She found me standing in line in the commons at Watterson Towers, and invited me over to sit with her and some of her dorm neighbors. Brit seemed interested in getting to know me better; I gave her my phone number, but forgot to ask for hers. Luckily, she called during the week, and we arranged to hang out the next Saturday.

I really didn't have much luck with dating in high school or community college, so I kept my expectations low. We walked around the quad for awhile, then did brunch on the opposite end of campus. Since I had nothing better to do that afternoon (or evening), I also followed her to the Miller Park Zoo, Eastland Mall, and back to her dorm. All in all, it was a memorable first date. After hanging out with her again for a movie night the next evening, and to watch "24" the evening after that, we officially announced we were dating by that Wednesday.

After my past failures with women, it was a relief of sorts to be in a relationship. However, one major red flag that came up on our first date proved to be our undoing: Babs was a born-again Christian. She asked me what my thoughts were on religion between brunch and the zoo, and kept insisting on taking me to faith-based events on or near campus. She also admitted that she cheated on every guy she had dated, but wanted to make an effort to be in a monogamous relationship.  I also realized she had a quick temper, and often made cutting comments about her dorm neighbors and people that I assumed were her friends.

Having never been serious with a woman before, I was inherently trying to keep things afloat, circumnavigating the loaded discussions about God and her frequent flirting with other guys by playing to our strengths and mutual interests. We were physically compatible, and maybe in hindsight we got physical too early in the relationship. We kissed on our first date, and things escalated after that, though we never had sex. If Babs said something I found offense or was throwing shade at one of her neighbors (which happened a lot), my instinct was to start a make-out session. I felt like the archetype of a horndog college student, putting my carnal urges above common sense.

One night, we were walking around downtown Normal (now Uptown Normal, long story) and Babs said she had something to tell me. Rather than be direct about it, she kept teasing the bombshell and kept making me guess. When we finally got back to her dorm room, she made me sit in a chair, she dimmed the lights, and she pulled out a bible. It turned out to be her most direct overture to converting me to born-again Christianity. It came from a sincere place, but I still wasn't aboard. If anything, the whole tease and reveal just made me uncomfortable.

The facade would keep cracking, but we would try to find ways to reconcile and compromise. One weekend, a movie night at her dorm came to abrupt halt when for no discernible reason, Brit started joking about a friend's eating disorder to her face. The girl ran out of the room in tears, the other partygoers left soon after, and just as I was about to leave, Babs begged me to stay and spend the night. Babs would insist I come along to run errands with her, even though I had plans that day, then get upset when I told her I needed to finish a paper or something. Toward the end of the semester, she needed help disassembling the loft for her bed, and I was the only person who showed up to help her. The physical duress of removing the loft, my inability to lift more than 60 lbs, and the humidity of an unusually warm early May day resulted in an excruciating afternoon.

A week or so later, I snapped. It was my turn to clean out and pack my dorm room for the semester, and even though I gave specific instructions on how to pack my clothes, she threw my clean shirts in with my dirty laundry. In hindsight it was a minuscule but in context I was livid. We proceeded to scream at each other for a solid ten minutes. Inexplicably, we reconciled that evening, but after that point it was pretty clear that we were treading on thin ice.

We both speculated that maybe we were spending too much time together, and since I lived in Downers Grove and she was from Park Forest (a one-hour drive, give or take) we could use the distance to our benefit. Any time we spent together during the Summer of 2006 was an event of sorts; we took two camping trips, one that went moderately well, the other cut short when Babs complained of stomach cramps (it turned out to be severe acid reflux). She spent Memorial Day weekend at my dorm during summer school, and I drove to her place at least three times.

When it was Babs' turn to crash at my parents' house in DG, the shit hit the fan. It turned out that her acid reflux was serious enough to prohibit certain foods from her diet, which turned an otherwise unexceptional home-cooked meal into a landmine. She clashed with everyone in the house except my sister; we argued, she argued with my mom over something I don't recall, and my father asked indignantly about her reading the Bible in the kitchen. A trip to Brookfield Zoo (her idea) was a miserable slog. She threatened to cut the trip short, but I persuaded her to stay a second night as planned. I drove her back to Park Forest the following evening feeling oddly relieved.

A week or two later, Babs called me in a slight panic. A few months earlier I met Dave, an old friend that she admitted to having a slight crush on. Feeling spiteful and perhaps a little confused, she kissed Dave that evening and decided it was best to confess right away. Not knowing how to react, I forgave her almost immediately. In reality, however I was annoyed that was falling back into old habits, and I probably should have ended the relationship right then and there.

Babs and I hung out at her mother's house the week after that, where we made an attempt to talk things out. The undercurrent of tension ebbed and flowed but never dissipated; I also noticed that she was making overtures with a second high school classmate.  The week after that, the day after my 22nd birthday, she dumped me. Babs cited my mother, my immaturity, and my noted reluctance to become a devout Christian. I spent that weekend sulking in my dorm room, pondering my next move. It could have been my opportunity to break free, but Babs wasn't out of my life for long.

Thoughts on an Imploding Candidacy

Midway through the first week of August, what appeared to be a close race for president suddenly became a knee-slapper. Fresh off a strong convention performance, Secretary Clinton took a double-digit lead in the national polls; a series of miscues by the always polarizing Donald Trump further augmented Clinton's lead. Between waffling on endorsing three high-ranking Republicans (later rectified), allegedly kicking a crying baby out of a rally (seemingly misconstrued, then blamed on "the liberal media"), and demonizing a Muslim-American casualty of war and his family (no apology yet), the Trump campaign is looking rather wobbly. I'm probably understating that, but at least liberals and conservatives alike realize his candidacy is even more toxic than it was at face value. This latest idiotic remark could be a death knell for an otherwise teflon candidacy... or not.

For now, Trump's departure from the presidential race is simply wishful thinking. He has proven, however what many Republican insiders have worried about: that he is simply too oderous and temperamental for the constant scrutiny of the Oval Office. If Hillary Clinton is leading in the polls in Ohio and Florida by at least 5% on Labor Day, then consider this election over. Trump's insane rhetoric brought the fringe right back into the GOP, but with the party struggling to find its identity (to put it mildly) it likely won't be enough to win the Oval Office.