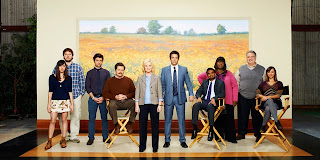 I must confess that I didn't watch too much drama this past year. "Mad Men" sat out the past year, episodes of "Breaking Bad" and "Boardwalk Empire" currently collect dust in my DVR, and I don't have Showtime, which ruled out critically praised fare like "Dexter" and "Homeland." By default, my viewing habits gravitated almost entirely towards comedy this year. With that said, here are my favorites from 2011, the year in TV:
BEST SHOWS
1. Parks & Recreation, NBC. This ensemble comedy, part workplace comedy and part small-scale political satire, was as consistently funny as anything on TV in recent memory. Amy Poehler is still the star, but Nick Offerman was the unquestioned breakout as stoic libertarian and manly-man Ron Swanson. Memorable Episodes: "Ron & Tammy: Part Two," "Fancy Party," "Lil' Sebastian," "Ron and Tammys," "Smallest Park"
2. Community, NBC. Boy, am I glad I stuck with this show. The genre-jumping and inherent weirdness may turn off new and/or casual viewers --so much so that the Greendale gang are on hiatus-- but where P&R hits for average, "Community" hits for power. If only it could get some Emmy lovin'. Memorable Episodes: "Intermediate Documentary Film-making," "Paradigms of Human Memory," "Remedial Chaos Theory"
3. Bob's Burgers, Fox. Arguably the funniest new show to air on network television in 2011, "Bob's" blends its absurdity and protagonist's constant slow burn with a big heart. H. Jon Benjamin is delightfully understated as the voice of Bob, but Kristen Schaal is a force as his sociopathic youngest daughter Louise. With Fox's aging "Animation Domination" lineup growing more erratic by the week, this proved to be a welcome source of fresh meat. Memorable Episodes: "Sacred Cow," "Art Crawl," "Spaghetti Western & Meatballs"
4. Childrens Hospital, Adult Swim. No less peculiar than "Community" but far less attached to reality, "Hospital" has transcended its initial parodying of medical dramas into something more bizarre and gut-bustingly silly. On top of that, each episode is 12 minutes long so you can watch an entire season in just over two hours. Memorable Episodes: "Ward 8," "Stryker Bites the Dust," "The Chet Episode"
5. Modern Family, ABC. Yes, this show has been a tad uneven since that stellar first season, but when "Family" meets it target the results can be quite entertaining. Memorable Episodes: "Someone To Watch Over Lily," "See You Next Fall," "Treehouse"
BEST EPISODES
30 Rock, "100." The fifth season of Tina Fey's sarcastic ode to all things NBC had a renaissance of sorts last year, but it peaked with an hour-long indicator of its syndication eligibility. The event was like a wedding: "100" had something old (Liz saving the show yet again), something new (Michael Keaton as a creepy janitor), something borrowed (Dean Winters from the Allstate commercials), and something blue (Rachel Dratch, no spoilers here).
Curb Your Enthusiasm, "Palestinian Chicken." The high point of CYE's New York season aired when the action was still in LA, with our anti-hero using ethnic cuisine as a bouncing ball for marital infidelity, Israel-Palestinian relations, and the loneliness of being a "social assassin."
Louie, "Duckling." I was torn between choosing this episode or the pitch-black suicide fable "Eddie," but I chose Louie's misadventures on a USO tour with a baby waterfowl as a stowaway. Delicately toeing the line between patriotism and discomfort humor, the ending of the episode is sweetly slapstick.
The Office, "Goodbye Michael." Considering how lazy and middling the Andy Bernard era of Dunder-Mufflin has been, I think most fans of the show will concur that this should've been the series finale. Instead, we'll have to settle for the series' last great episode. Why didn't Steve Carell win an Emmy for his troubles?
Onion News Network, "Real America." The fanboy in me had to give The Onion's basic cable offspring some TLC. Again, this was a tough pick but I went with the "episode" where the cable-news parody put a spotlight on a group of indigenous midwesterners hosting representatives of congress like they were foreign ambassadors. To host the summit in a bowling alley was just ingenious.
--+---+--
How can I sum up 2011 without being glib or vague? This was a year where we was said goodbye to heroes (Andy Whitfield, Cliff Robertson) and villains (Osama bin Laden, Moammar Gadhafi, Kim Jong Il). We bid adieu to well-endowed women (Jane Russell, Maria Schneider) and giant boobs (Silvio Berlusconi, Ozzie Guillen) alike. On a personal level, this was a year of triumph (improv) and struggle (financially justifying to Chicago), of success (losing 17 pounds) and failure (the never-ending job search). My resolution for 2012? To stop using parentheses for dramatic effect.
In Memoriam: Gerry Rafferty, Duke Snider, Dave Duerson, Suze Rotolo, Jack Lalanne, Len Lesser, Mike Starr, Joe Morello, Thomas Roeser, Warren Christopher, Geraldine Ferraro, Sidney Lumet, Michael Sarrazin, Elisabeth Sladen, Randy Savage, Elizabeth Taylor, Harmon Killebrew, Paul Splittorff, Jeff Conaway, Clarence Clemons, Seve Ballesteros, Dick Williams, Betty Ford, Sherwood Schwartz, Lee Roy Selmon, Bubba Smith, Amy Winehouse, Sen. Charles Percy, Al Davis, Steve Jobs, Norman Corwin, Heavy D, Dan Wheldon, Andy Rooney, Smokin' Joe Frazier, Bil Keane, Patrice O'Neal, Dobie Gray, Harry Morgan, Paul Motion, Christopher Hitchens, Vaclav Havel, Joe Bodolai, Leo Gardzielewski, and Jeanette Dickinson.
See you next year!
Posted by Stuart A. at 11:49 PM No comments:

With one fell swoop, the GOP presidential primary just got marginally less crazy. Self-made businessman Herman Cain dropped out of the race last weekend, mere weeks until the first primary. When allegations of sexual harassment and philandering snowballed and financial support plummeted, the ex-restauranteur painted himself into a corner. In a race where the status quo is still in comtempt and th unofficial title of frontrunner has been like musical chairs --Romney, Bachmann, Perry, now Gingrich-- the one true Washington outsider in the race was also its most meteoric fall.
So one must wonder: what torpedoed Cain that couldn't sink Bill Clinton 20 years ago? For starters, the mass media is far more relentless than it was in the early '90s, let alone before the WTC attacks. Secondly, nobody could prove Clinton committed adultery until well into his second term. Sadly, for all intents and purposes it seems like Cain brought this upon himself; he seemed like the type that thought he could do a better job than the current guy, not realizing there are strings attached. All in all, Cain's carnival of a campaign just couldn't walk the tightrope.
Other notes:
+ So what's my take on Ron Santo's "long-awaited" Hall of Fame induction? I posted my thoughts shortly after his passing last year. Considering that Santo only garnered 21% of the vote in his first year of elegibility (1982) and the rise was very slow and steady, one must wonder how many BBWAA scribes simply read up on sabermetrics --6th best third baseman ever my foot-- drank the Cubbie Kool-Aid, or both.
+ My old TV.com friend and blog pseudo-correspondent Mark a/k/a mp34mp caught wind of the NHL division realignment before I did. He asked for my two cents on Twitter, and frankly I found some flaws right away. Personally, I think it's a little pointless to have four mini-conferences of seven to eight teams when bring back the four-division format would've sufficed. If it were up to me, however I would've scratched out the old/new divisional rivalries and gone completely regional: put the seven Canadian teams in one division, then split the 23 American squads into west, central, and eastern divisions. For example:
Again, I'm partially disregarding some long-standing rivalries, but it might work. Just saying.
+ Improv Update: one week from Friday, I will be auditioning for Level 3 of the Second City Conservatory program. Considering that it took me over a year just to get into Level 1, I'm hoping to buck some unfortunate trends. It's ten days away, but wish me luck!
Posted by Stuart A. at 9:57 PM No comments: