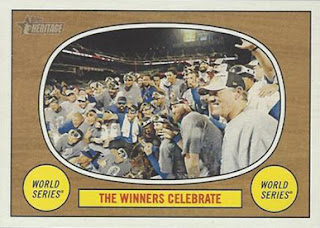 It seems hard to believe, but the 2016 baseball season starts in a few days. A particularly zany free agent season left more questions than answers; the NL West had more turnovers than a church bake sale, and who finishes last in the AL East is anyone's guess. That followed a bizarre season where Detroit and Cincinnati both finished in last place, a record number of position players pitched in relief --including the ALCS-- and the once-dormant Kansas City Royals hoisted the Commissioner's Trophy (I'm still giddy with disbelief). As I do every year, I'm going to try to make sense of all the mishegoss, 17 syllables at a time.

This March 17th marks a dubious anniversary, one that doesn’t necessarily affect me in a direct way, but summarizes the foibles of working extensively as a temp. Since my first assignment over five years ago, I’ve had positive and negative experiences, jobs that fit my skills perfectly balanced out by jobs that were total mismatches. I’ve had at least one experience that started out well and very gradually went sour.  I have seen both disarray and machine-like precision. However, nothing quite compared to a five-month assignment that I had during the spring and summer of last year:

In early March, 2015 my agency offered me an assignment with a company called RevMD Partners. As their web site succinctly explains, RevMD is a subsidiary company that handles accounts receivable for ambulance service claims. (At the time, they handled Rural Metro, but more on that later.) I would be doing billing for the company’s regional office in Westmont, IL, in a corporate suite down the street from my parents’ house. I was looking for a temp position that was both geographically closer to Chicago (one town east, close enough) and offered a temp-to-hire opportunity. I said yes, and my contact told me to show up Tuesday morning.

I arrived at the office at 8:30 sharp to meet the management in a conference room. The interior of the building looked like a fairly ordinary office: beige walls, thin carpet, a large maze of drab cubicles. After a short tour, I discovered that this wouldn’t be the building I would work in. We walked across the corporate park to an adjacent building, where the entire billing department was housed. It was recently acquired following a company expansion and it showed: computers on picnic tables, yellow “do not cross” tape over exposed wires between desks, paper placards with employees’ names taped to their monitors. There were somewhere between 80 and 90 people in one giant room, with all the desks facing a curved side of tinted panel windows.

The first thing that struck me was how diverse the department was. Of approximately 85 people, only six or seven were male. The women in the office were overwhelmingly African-American, ranging in age from 20 to 60, and mostly from the west and south sides of Chicago. With a handful of exceptions, the billing staff were temps like me; a handful of preexisting RevMD employees transferred from the one office to the other, mere weeks before I arrived. Open-ended assignment or not, there had already been some turnover in the temp ranks. Also, the company was family-owned; Joe, our manager, was nephew of the company’s founder and CFO.

Jazz (not her real name), the woman who trained me, had only been there a month. She was in her early 20s, had a bachelor's in communications (like me), but she was still looking for her first permanent gig after college. She was also a short-timer; tentatively, she was moving to LA in early April to pursue a career as an actress/model. I sat between her and Fifi (again, not her real name) a woman about 10 years my senior. Where Jazz was somewhat gregarious, Fifi was taciturn and laser-focused on her work. I struggled with certain aspects of the data entry, so I ended up sitting in with a second woman two sections over for a day or two.

I soon discovered that this office was heavy on “street smarts” and agonizingly low on “book smarts.” Joe the manager graduated (I think) from Northern Illinois University, a decent school but not exactly Northwestern or UChicago. The majority of the staff either had an associate’s or just a high school diploma. I’m this instance, I’m not necessarily saying “street smarts” in a derogatory way; imagine you had a basketball team, and your starting five were purely offensive players. They can shoot and pass the ball, but someone still has to block shots and rebound. There was a vast chasm between thinking with your gut and applying rigorous, well-reasoned solutions, one that sometimes felt insurmountable.

On my third day in the office, Joe concluded the morning announcements by mentioning that several members of the staff had been arguing with each other, and some feuds had developed in the office. Joe warned everyone to leave their drama at the door and put more focus on your work. Additionally, he mentioned that at least one person in the office refused to wash their hands after using the bathroom, and because so many people complained, he implored the staff to use proper hygiene. I was aware of an undercurrent of drama, but chose not to participate or listen to any gossip; the second complaint, however made me chortle. Unfortunately, these same two bullet points kept coming up during the morning announcements, and it got to a point where Joe threatened to bring a “hygiene instructor” that would perform a mandatory presentation. Joe only suggested dismissing temps as a last resort.

I had a pre-scheduled day off on March 17th, my two-week anniversary. I let my agency know that I had to drive my father to a doctor’s appointment, and confirmed the personal day with Joe. When I returned on March 18th, there was a new sort of tension in the air. During his morning address, Joe said that yesterday was “just a really bad day” and that it shouldn’t deter us from doing our work, and mentioned that nine people had been pulled from their assignment. I know until an hour or so later that Jazz and my second trainer were among the dismissed. Of course, Fifi didn’t feel inclined to comment.

During my afternoon break, I asked some of the other women in the office what had happened. With great trepidation, and in no particular order, they explained what happened on March 17th. A fistfight broke out between at least four women in the lunchroom, including my second trainer. The woman who was accused (or at least, thought she was accused) of poor hygiene trashed one of the ladies’ washrooms and may or may have smeared feces on the mirrors. Jazz called out Joe for not being more proactive about the various conflicts in the office, had a meltdown on the floor, called half the women in the office a cunt, and was escorted out of the building by security.  After all that, a woman in the office who was seven months pregnant went into false labor, forcing Joe to call 911.

Upon getting the whole story, my representative and her associate came into the office and held a closed-door meeting with other temps from my agency. They wanted to assure everyone that yesterday was an anomaly, and that if we felt our work space as at risk again for any reason that we should reach out. The next few days went by without much incident. The pregnant woman came back to the office on Thursday the 19th, went on maternity leave a month later, then decided to stay at home with child. By the end of the next week, about a half-dozen people quit, partially because of the hostile work environment, and also likely due to the feckless management. A week after that, Fifi left work early and never came back.

A handful of people were either brought aboard permanently or promoted to team leader positions. Some worked hard to earn the extra responsibility, while others were thrust into the position because because certain tasks had to be delineated (myself included). The inexperience was often transparent, and the people that knew what to do were overwhelmed. Another round of new people came in, and by mid-May there had been at least 50% turnover from when I started. In mid-June that was another round of firings triggered by a new wave of drama, mostly petty squabbles. There were trainees in the office almost every Monday. By early August there had been 90% turnover since March.

At about that time, we found out that RevMD and Rural Metro had been bought out by a larger, more prominent ambulance service. They promised that the entire staff would be made into permanent employees, and that they would move the office to larger, much nicer location. I perceived it as the latest in a long line of empty promises, but for the sake of my own job, I kept my mouth shut. A few days later, after my shift had ended I got a phone call from my agency; they were pulling me from the assignment. It confirmed what I had suspected: the management liked me, but didn’t necessarily “love” me. After staying in touch with a handful of other RevMD temps and employees, I found that the near-constant hiring and firings continued, and that there was a massive layoff in January 2016. To the best of my knowledge, Joe is still there.

In the interim, I’ve had other temp positions, all short-term. I feel more content substitute teaching, a field that I stumbled into after college. It wasn’t the field I pursued, but I find it far more fulfilling than in a lowly temp position. When summer break starts, I’ll likely find another short-term temp opportunity, something to keep me afloat until mid-August. Temping offers consistency, but the room for achievement and advancement is minuscule. And yet, I still can’t quite live down those five crazy months at RevMD (and I’m only telling you part of the story). Some things just aren’t worth a good paycheck.
Posted by Stuart A. at 10:35 PM No comments:

First of all, my belated thanks to everyone who extended their condolences a few weeks ago. My family is moving on, and we appreciate the positive thoughts.

Secondly, I really haven't had a chance to explain what I've been doing or working on recently. At the moment, I'm focusing on substitute teaching; I'm considering going back to school for a secondary education degree. Right now I'm eligible to sub in about 40% of the districts in my area; a full teaching license on top of a sub license would give me full eligibility. A full-time teaching position wouldn't be bad, either.

Thirdly, I'm in a bunch of shows this month. My improv duo Flower Shop Bangers is playing the Second City in Chicago for the first time tonight at 10pm, and again next Saturday. Additionally, I'm still writing and producing; I'm hosting another "Power Couples of Improv" show on March 21, and I'm working on a solo sketch revue. If you're in or near Chicago, I hope you check out at least one of these shows.

Next Week: the story of the St. Patrick's Day Massacre.