For the second summer in a row, the SNL offseason was a busy and tumultuous one. Last year's decision to overpopulate the cast fell just short of disaster; of the six new hires that we met in Tina Fey's monologue, only Beck Bennett and Kyle Mooney survived a caustic but necessary bloodletting. They join midseason hire Sasheer Zamata and co-head writer Colin Jost as the only Year 39 newbies to see their sophomore year. After five years of mostly thankless supporting roles, followed by a belated breakout of sorts in 2013-14, Nasim Pedrad left the cast for sitcom stardom. Joining the ranks in 2014-15 is Year 39 writer Michael Che (the first African-American Weekend Update anchor ever) and stand-up comedian Pete Davidson (the first cast member born in the 1990s, and only the third Latino in show history). The most obvious change of all was also the most tragic; announcer Don Pardo, who announced the opening credits for all but one season until last May, died of natural causes in August at age 96. His successor is former cast member Darrell Hammond, who I'm sure will resurrect his Bill Clinton impression as the Decision '16 picture clears up.

As SNL enters its 40th season (oy gevalt) expect past and present to converge and cross paths many times in the coming months. The next two scheduled hosts are cast alumni, one of the best and most beloved cast members of the past decade (Bill Hader) and one who had a single, nondescript season as a featured player and writer (the great Sarah Silverman). Tonight's show, however follows the pattern of booking the star of the biggest movie of the summer as well as the performer of the current #1 hit in the country. "Parks & Recreation" co-star/big screen heartthrob Chris Pratt and economy-size chanteuse Ariana Grande fits that bill.

For the purposes of this review, I'm mashing up the sketch-by-sketch analysis with assorted notes:

+ I know it's the season premiere, but it still annoys me when the cold opening starts with canned, thunderous applause. It just doesn't feel natural, you know?

+ As for the cold open itself, you can tell the various NFL scandals were on the minds of everyone in the writers room these past two weeks.  It's a hot button topic, don't get me wrong, but I was more curious to see a topical sketch about, say, ISIS or Ferguson, MO. The sketch itself was okay; CNN's "State of the Union" set the template for Roger Goodell's (Chris) cluelessness, Ray Rice's (KT) dodginess, and Jay Pharaoh doing a cartoony take on mealymouthed Shannon Sharpe.

+ He already pointed this out on Instagram, but every character Taran Killam played tonight required a ridiculous amount of makeup.

+ Tonight's Weekend Update ran a bit long, yet at the same time offered a glimmer of hope to the undisputed weak spot of Season 39's second half. Michael Che has found his groove almost immediately, delivering clever jokes about Hillary Clinton's trip to Iowa and "Orange is the New Black." Colin Jost is still a work in progress; he seems a little more animated, but not by much. The return of The Girl You Wish You Hadn't Started a Conversation With at a Party was a passing of the baton of sorts; most SNL fans will argue that Colin was more problematic than Cecily, but she's clearly happier to be away from the WU desk. Whether you liked it or not, "youngster" Pete Davidson made a strong first impression with a stand-up bit about he would perform oral sex for obscene quantities of money.

+ I think I grasped what tonight's filmed piece was spoofing? The intentionally stilted dialogue and wooden acting suggested a parody of some lousy early '90s family sitcom --something akin to "Blossom" or ABC's TGIF juggernaut-- or maybe it exists to simply exist.

+ I don't know if Michael Che will be a regular presence in sketches, and I assume Pete Davidson will be at some point, but I was a little bewildered to see Cojo outside of the Update construct. Even as a football player accused of mail fraud "because he's the punter," it didn't really seem like Jost was playing a character.

+ Speaking of "NFL on CBS," Leslie Jones (a writer) was in more sketches than Sasheer Zamata (an actual cast member). Anomaly or buyer's remorse?

+ For a sitcom actress, Ariana Grande did not seem wholly uncomfortable in these surroundings. She clearly flubbed her only line in the "Birthday Wish" sketch, and apparently forgot her chereography in both of her musical performances. It wasn't a Lana Del Rey train wreck or a Ashlee Simpson meltdown by any means, but it was still underwhelming.

VERDICT: This was not a perfect show, but after the logjam of Year 39, this was a step in the right direction. This (slightly) smaller cast is a lot tighter, though the two newbies and the surviving members of the Class of '13 mostly took a backseat to more established members of the cast. Chris Pratt was a fun host, balancing his Starlord bravado with Andy Dwyer goofiness to great effect. The writing was as hit and miss as you'd expect, though the performances from Pratt and the repertory cast more than made up for it.

Labels: Guardians of the Galaxy, SNL 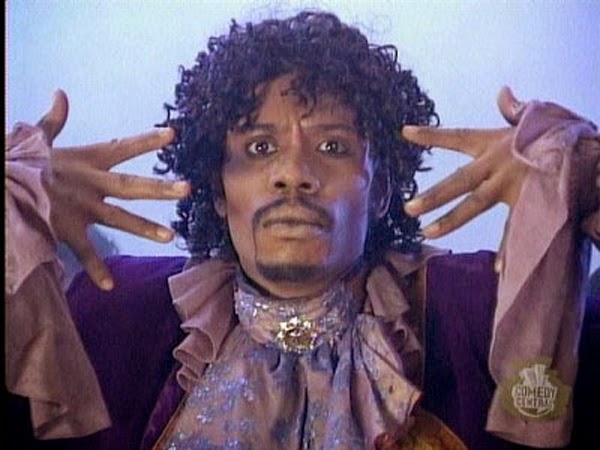 This year marks the unofficial tenth anniversary of what I'll call "Chappellemania." The mid-2000s were a lousy time for TV comedy --sitcom, sketch, or otherwise-- so for that time period I'd rank Chappelle's Show up there with "Arrested Development," "Scrubs," and Bush-era "Daily Show" among the few torch-bearers of the form. As a sketch comedy in 2004, Dave Chappelle was running laps around the competition: SNL was still struggling to find itself post-Will Ferrell, and MADtv was consistently inconsistent and relying heavily on one-note recurring characters.

The story behind the Dave Chappelle's rise to fame and confusing downfall is a fable told many times, a cautionary tale of too much too soon. After years of struggling, including a procession of failed TV pilots, Chappelle became an overnight success. However, writer's block and interference from Viacom instigated an apparent nervous breakdown from which Chappelle is still recovering. He gave us two years of great sketches and pointed social commentary (let's pretend the piecemeal, mostly Chappelle-free third season didn't happen) before disappearing into the ether. He returned to stand-up in recent years a humbled family man, but it just isn't the same.

So how does "Seasons of Love" tackle a sketch comedy show? By focusing more on the individual sketches, rather than episodes. Sketch comedy is inherently uneven, so it would seem unwieldy to judge the second season of "Chappelle's Show" by looking at an entire 30-minute episode (including the obligatory music video) as a whole. The first year is fine in its own right, but I'll argue that season two is a desert-island comedy pick.

"Black Gallagher," 1/28/04. More or less a blackout sketch, this short, sweet, and succient bit lampoons the one-joke oddity that is Gallagher. Let's just say the Slegde-O-Matic is far from what the audience was expecting.

"Charlie Murphy's True Hollywood Stories," 2/11/04. Arguably the best-known, most-loved, and most quoted sketch in the entire series, Eddie's older brother (and an okay comedian in his own right) details a nightmarish evening in 1982 with the R&B star, by then a full-blown coke addict and apparent sociopath. The madness of this particular night is augmented by commentary from the real-life James, who denies nothing ("cocaine is a helluva drug") and only intermittently seems remorseful. When James died suddenly six months later, Comedy Central conspicuously paid tribute by repeating this episode three times in the span of six hours. Pecularily, Charlie's perilous brush with fame led to...

"Charlie Murphy's True Hollywood Stories," 2/18/04. ...an encounter with Prince. Where Chappelle's imitation of Rick James vaulted the show into the pop culture stratosphere, this one-off encounter with the Purple One might have been the stronger sketch. A chance meeting at an after-party segues into Charlie and friends getting their asses kicked on the basketball court by the diminutive guitar god (Chappelle again, see above) and his puffy-shirted entourage. There was no Greek chorus here; you'd just have to take Charlie's word for it.

"Black Bush," 4/14/04. Topical sketches typically have a short shelf life, and it usually doesn't work as nostalgia. However, the last sketch of the season is a unique exception. Chappelle and crew reimagine the Bush administration's initial handling of Operation Enduring Freedom as if our 43rd president were a disingenuous black guy. (The cameo from Prime Minister "Black Blair" is a riot.) Just when it seemed like Chappelle's near-constant skewing of race relations was starting to wear thin, it roars back with a vengence.

The NFL took a big credibility hit this month. Whether or not you thought Roger Goodell's punishment of former Ravens Pro Bowler Ray Rice was enough, the slow, doddering response was appalling. To assume that a battery or spousal abuse charge would get a lighter punishment than a failed drug or PED test is baffling, despite an ex post facto attempt at changing and augmenting the length of suspension. Not making any real changes until definitive video footage of Rice knocking out his then-fiancee, however is disingenuous. Rice's actions were inexcusable, and it deserved more than a slap on the wrist.

So does Roger Goodell deserve to lose his job? The National Organization of Women's demands of resignation are drastic. The new punishment that Rice faces is far more justified; not only is he suspended indefinitely, but his entire NFL career has been jeopardized. I do, however recommend an investigation into what Goodell knew and how he learned of this information. I waffled at the thought of Goodell being forced out until this surfaced; while not a cover-up on the scale of Watergate, was more than just a slip-up. It's not like the NFL didn't know what the other hand was doing; someone in the organization was stashing evidence. For that, Goodell will likely get forced out.

+ Part of me worries that we created this ISIS (ISIL?) monster. As such, we're the only country that can stop them. Much like Afghanistan in the early 1980s, we support a rebel organization in a foreign country (one, we assume, based in democracy) fighting a totalitarian power, and in due time it backfires. This time around, we're fighting an organization that makes Al Qaida look like the Apple Dumpling Gang. I fear history is doomed to repeat itself.

Next Week: the next installment of "Seasons of Love."