It's that time of year again. The airports are packed, the Butterball hotline is swamped, and Vegas is taking over/under bets for the Cowboys-Panthers game. Thanksgiving looms near, and as tradition indicates I will share what I'm thankful (and not thankful for). For better or worse, this year has given me plenty to think about:

Thanks: steady temp work, marriage equality, a "Peanuts" movie that was surprisingly charming, fewer stores open on Thanksgiving and/or Black Friday, the health and well-being of my family, and above all a Royals World Series championship.

No Thanks: ISIS/ISIL, xenophobia, incessant and wrongheaded debates about gun control, the Illinois fiscal budget crisis, possible sleep deprivation, and people that never answer their e-mails and messages.

Enjoy the holiday! If you'll excuse me, I need to figure what I'll write about for my milestone blog next month.

The election is now less than a year away, but the chaos is only slightly beginning to subside. Where the Democratic primary has weeded out some of the weaker candidates --I forgot Larry Lessig was running until, well, he quit-- the Republican primary is still an insane dogfight. You have at least three candidates (Dr. Ben Carson, Mike Huckabee, and Rick Santorum) that are all fighting for the same Christian-conservative demographic. You also have Jeb Bush, Chris Christie, John Kasich, and George Pataki struggling to make any leeway against one another for the more moderate sector of the GOP. I don't know Rand Paul is aiming for, because he keeps flip-flopping. It is sort of amusing to see that the GOP prides itself in unity, but couldn't be more splintered on the national stage.

At the same time, the Democrats can be like herding cats, yet their strategy for 2016 is actually inching toward coelescing. For obvious reasons, Saturday's Democratic debate was dominated by domestic security and foreign policy. With limited extra effort, Sec. Clinton more or less proved why she was the most electable of the three candidates; Sen. Sanders seemed wishy-washy about gun control, and his comment about how the Middle East should defend itself against ISIS was a tad naive. Martin O'Malley made some valid points, but he's not a strong debater. In spite of her many flaws, Hillary Clinton is the Democrats' best shot in 2016; with the growing populist movement within the party --a Bizarro Tea Party, one might say-- she needs to shake off some of her establishment ticks and roll up her sleeves. Her extensive history with foreign affairs resulted in a crucial KO last night, but Clinton still has a long way to go.

+ I'm very reluctant to air out my dirty laundry, but I felt like this was sort of worth sharing. For the past two years, I've been manhandled by crippling credit card debt. In the summer and fall of 2013, in quick procession I had to deal with multiple car repairs, on top of producing a show that did not turn a profit. I put nearly everything on my Visa, then relied upon on my Mastercard for future purchases. Then I went through an extended period where I wasn't working a regular basis, so then I ended up maxing out both cards nearly every month. I'm proud to say, however that after some shrewed budgeting most of that debt has now cleared. I'm still living on modest means, but I don't quite feel as handcuffed as before.

+ I have no words for what has transpired in France this weekend. This was a massive act of cowardice, one that cannot be justified or quickly forgotten. My thoughts and prayers are with the people of Paris. 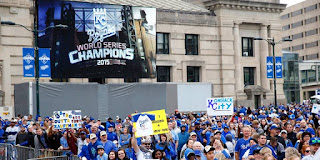 It's Tuesday, but Sunday night is still fresh in my mind. I feel a need to articulate everything I've processed during these wonderfully surreal 24 hours. Additionally, I want to assure anyone who is growing annoyed by the near-constant baseball posts that this will be the last one for awhile. (Someone unfriended me on Facebook during the 12th inning last night, so clearly I rankled at least one person.)

First of all, my thanks to everyone who was pulling for me these last couple of years. The vast majority of the people that have commented on my status updates were high school and college buddies, a group of mostly White Sox fans that gave me significant grief during the Royals' wilderness years in the late '90s and throughout the 2000s. It took it all in stride, and even though I don't miss the losing, I will miss telling people that the Royals are "last in the AL Central, first in your hearts."

I didn't really know a whole lot of other Royals fans in person --my Dad, who lived in Overland Park, KS in the late '40s, is a Cards fan-- but upon immersing myself into the Chicago improv community, I met a number of Missouri and Kansas natives that bleed Royals blue. Even though we all kind of did our own thing on Sunday night, I'm glad we were able to watch last year's Game 7 letdown as a proud, united front.

This is for Salvador Perez, who was on a season-long quest for redemption. After getting completely stymied by the Giants' pitching in last year's Fall Classic --a WAR around 1.0, incidentally-- our faithful catcher was a man with a mission. Even if two RBIs and two runs in five games may look pedestrian, his .348 average in the series was more than enough to justify winning Most Valuable Player. When Drew Butera caught the 12th inning, I knew Salvy had earned his rest.

This is for Gordo, Moose, and Hos, three top prospects that initially struggled upon first playing the majors and were nearly written off as busts. Alex was moved from third to left, Moose went back to Ohama to learn how to hit through an infield shift, and Hosmer just needed to figure out major league pitching. Patience and perseverence pays off.

This is for Edinson Volquez, who pitched twice in the series with a heavy heart. I don't know if he knew his father passed away before Game 1, and it doesn't matter now, but Eddie didn't let tragedy get in the way of his goals.

This is for manager Ned Yost, who finally shook off the "idiot" label. For now, anyway.

This is for the Kane County Cougars, the single-A team that was KC's minor league affiliate in 2011 and 2012. Getting to see the Royals' stars of tomorrow (including that one-hit wonder, Christian Colon) 45 minutes from where I grew up was a delight and a pleasure.

This is for Matt Harvey, who insisted on pitching the 9th inning, and is now assuring Terry Collins that he can finish nine Bud Light pitchers in one sitting.

This is for Addison Reed and Bartolo Colon, because quite frankly, no matter where we are Royals are always going to feast on White Sox pitching. (Maybe I should be thanking Don Cooper instead.)

This is for Howser, Quiz, and Splitt, the Royals greats that weren't alive to see this.

Above all, this is for my dad's side of the family, and especially my great-aunt Bea Stewart, who would regale visiting relatives with inappropriate comments about George Brett's butt.

It feels so redeeming to say this, and it still feels a little heterodox, but dreams have become reality. Ladies and gentlemen, your 2015 World Series Champion Kansas City Royals. #Crowned
Posted by Stuart A. at 9:06 PM No comments: