Five years ago this week, I was replaced at my position at Salem Communications' Chicago branch. It was the culmination of 3 1/2 months of sitting on my hands, and the end of 11 quixotic years of pursuing my lifelong dream of a career in the radio industry. I went into greater detail about those final few months in a blog four years ago, and though I'm not necessarily at peace with how things played out, radio is a chapter in my life that is mostly behind me.

Even if that career path didn't totally pan out, part of me couldn't quite give up radio. In April 2011, I landed a job interview for a producer/sound engineer position for a time-brokered* show. The host of the show was a "life guru" and fitness expert who lived in a giant house in a tony Chicago suburb. Her show was on my old station for a short time, so I knew the name and the concept. The first two-thirds of the interview went fine; it was a pleasant conversation with just a handful of the usual bullet-point interview questions. I mentioned I had a blog --this blog-- when she asked for a sample of my writing; I nonchalantly showed her a recent entry and she discovered we different political beliefs. The interview was more or less over.

In hindsight, I dodged two bullets. The guy who helped me land the interview admitted that the life guru was an egomaniac and at times impossible to work with. If something bad happened, he claimed, everyone would take the blame except her. As such, her time-brokered* show has been on and off hiatus several times since our meeting in Hinsdale. By mid-2011 my search for radio work in any capacity was treading water, so I put more energy into finding work that suited my other skills.

Being replaced at the cluster was the second bullet. Since was I dismissed on April 30th, 2010, there have been four different people in my old position. The candidate that my disingenuous business manager preferred lasted 11 months before quitting, and there's been a different person at the front desk every year or two since. As I feared and rightfully assumed, both stations are more concerned with putting out a mediocre, pandering product for a fringe audience rather than compete with top Chicago AM stations like WLS, WGN, and WBBM. Things hit a bizarre nadir when this happened, as brazen and transparent a publicity stunt can get.

Though the tone of this blog post might seem spiteful, I'm happier now than I was in the waning days of my run at Salem. I no longer have to hide the fact that I'm a progressive in an office that was overwhelmingly conservative, and I no longer deal with irate listeners or incompetent management. I still volunteer from time to time at the station where I worked in community college, and for posterity I recorded some new airchecks last year. I still have some misgivings, but overall I'm better off.

*Purchased airtime on a radio station, usually as weekend programming filler, often a thinly veiled informercial.
Posted by Stuart A. at 10:08 PM No comments: 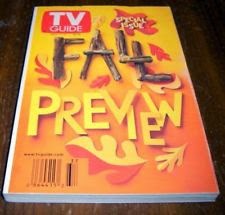 In the past, I've alluded to (and espoused upon) the argument that 1999 was one of my favorite years of TV. The last year of the 20th century was a pop culture watershed; everything from cinema to literature seemed to benefit from Y2K paranoia and the encroaching sense that some kind of era was ending. (I wrote about 1999 in music a few years ago.) Network TV had a bumper crop of half-hour, multi-camera comedies, and following the success of "The Simpsons" and "South Park," a record number of prime-time animated series. It was also perhaps the last great year for network TV, before cable and premium channels lured aspiring show-runners and wannabe auteurs with creative freedom and implied accolades. Plus, you can binge-watch just about all of these shows online now, rather than set your VCR recorder and hope for the best.

1. The Sopranos, HBO. Bada bing! The latest (last?) great era of television began in January '99, with the story of a New Jersey mob capo who discreetly goes into therapy. Almost overnight the show became a pop culture sensation, turned HBO (and premium cable) a beacon for "prestige" programming, and made beleaguered mobster Tony Soprano a household name. Memorable Episodes: "Pilot," "Nobody Knows Anything," "I Dream of Jeannie Cusamano"

2. Freaks and Geeks, NBC. The patron saint of one-year wonders and "brilliant but cancelled" discussions, Judd Apatow's most enduring creation was both a sweetly awkward look at teen angst in the early '80s and a farm team for cinematic comedy in the late 2000s. Memorable Episodes: "Pilot," "Kim Kelly is My Friend"

3. The West Wing, NBC. Following in the long, proud tradition of high-caliber, large ensamble cast dramas on The Peacock, TWW had the novel idea of turning political science into must-watch television. Though the White House staff was meant to be the core of the show, Aaron Sorkin and company found their heart in America's favorite fictional president, Josiah Bartlett. Memorable Episodes: "Five Votes Down," "In Excelsis Deo"

5. The Simpsons, Fox. While this wasn't the Springfield clan's finest year, the show had a creative rebound of sorts after a very uneven 9th season. It's staggering to think that at one time, even after a decade on the air, fans were worried the show was going to be cancelled. Even if the show got gag-heavy and reliant on celebrity cameos, it was still better than, say, "Dharma & Greg." Memorable Episodes: "Maximum Homerdrive," "Simpsons Bible Stories," "Hello Gutter, Hello Fadder"

Your thoughts?
Posted by Stuart A. at 9:47 PM No comments:

In the end, it was a big journalistic train wreck. Earlier this month, the Columbia Journalism Review determined that a 2014 article in Rolling Stone magazine about sexual assault was likely totally fabricated. The article, written by Sabrina Erdely, focused on a University of Virginia undergrad who was gang-raped by her peers. Erdely, who has been criticized for fabricating details in the past, apparently ignored every journalistic commandment in the book: elevating fact-gathering over moral narratives; hunting down info; asking pointed questions. She made Rolling Stone hopelessly foolish, and a writing career that was already on the rocks is likely sinking into the abyss. Erdely's piece wasn't so much literary non-fiction as it was agenda-driven mythmaking. The story behind the story has become more interesting than the original article itself.

Part of the public outrage behind this scandal is fueled by the "rape culture" discussion that has hit fever pitch in recent years. Feminists have argued that rape is pervasive and has been normalized in the broader culture as a result of generations of traditional gender roles, and such instances are quickly and wrongfully dismissed. Erdely assumed that by interviewing the victim only and glossing over the frat brothers that she demonized, it would both sustain the brutal perspective she desired as well as cater to the audience she was preaching to. The editors of Rolling Stone, famed equally for somewhat archaic music journalism and left-leaning muckraking, thought this was the eye-opening scare story that this burgeoning controversy needed to start a broader discussion. Instead, it created a whole different scandal.

Just because one woman exaggerated allegations of sexual assault --or a second woman made up details about the first woman's encounter-- does not downplay the fact that rape is a serious issue, especially on college campuses. It happens on campuses across the country almost on a daily basis, yet most cases of rape are never reported or swept under the rug. This is a major issue that has been pandemic for several years (if not decades), but there is hardly anything to indicate that the collegiate rape crisis is under control, if not going away. Instead, Erdely and her lack of ethics has nearly trivialized a crisis without solution or resolve.

Next Week: my latest "Seasons of Love" TV essay.