I thought I was going to have time to post three blogs in September. I guess not:

+ Fall is on the horizon in the American Midwest, and I wonder how restaurants that had to ret-con outdoor seating will recalibrate and survive. We slowly felt comfortable going outside again, and now we have to go back in. A rough Spring and Summer will give way to an equally formidable Fall and Winter. It makes sense to hoard supplies again. Alas, I am reminded of Aesop; we aspire to be a nation of ants, but in reality we're a bunch of grasshoppers.

For liberals and progressives alike, the death of Ruth Bader Ginsberg we both anticipated yet we feared when it would happen. She was sharp and resilient as ever, but her body failed her. It doesn't make sense to appoint anyone before the election --six weeks away, friends-- but Trump and his cronies will push it through. Amy Coney Barrett is the most moderate of Trump's three picks, though that's not saying much.

+ What becomes of the U.S. Supreme Court remains to be seen. Jimmy Carter was the last president to not appoint anyone, so from 1969 to 1992 all the justices were appointed by Republicans. Some, like Sandra Day O'Connor and William Rehnquist, proved to be more moderate than others. Today's GOP clearly doesn't want centrists. At the same time, Clarence Thomas is "only" 72 years old but approaching 30 years on the court, and could easily be succeeded by a progressive judge.

+ Both Chicago teams made the MLB playoffs this year, only the third time that's ever happened. How fitting of 2020 that both teams could beat the odds and face each other in the World Series... in Dallas. 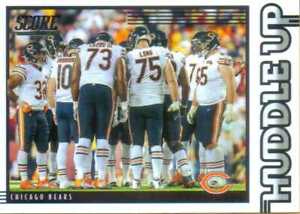 Hey, I guess we're having a football season.

At the onset of the outbreak nearly six months ago, it looked like the NFL was in a better position than pretty much any other team sport. After all, their season wasn't halted. Then the pandemic dragged on into the summer and fall, and probably into 2021. The league bucked trends and opted to have partially filled stadiums, at least until another spike halts the season. (At least tonight's Chiefs-Texans season opener was played without relative incident.)

With or without COVID, the NFL is still ripe for drama and storylines. How will the Patriots manage without TB12 for the first time in nearly two decades? Is the NFC West really that good, and is the AFC East really that uninspiring? What if I break it down, 17 soma at at time?

4. Lions (6-10). A healthy Stafford/is load-bearing; the improved/young D must impress.

3. Browns (7-9). They'll make the playoffs/...someday; can their Baker stop/making turnovers?