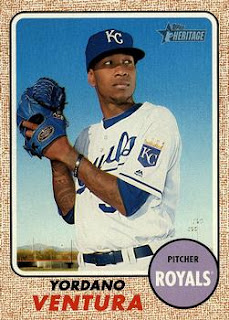 My beloved Kansas City Royals were subdued by a World Series hangover one year later than anticipated. The realities of free agency defanged our rotation and bullpen in 2016, and injuries took their toll on key position players like Mike Moustakas, Lorenzo Cain, Alex Gordon. Free agency continued to nibble away True Blue in 2017 --top thief Jarrod Dyson was due for a raise, now he's in Seattle-- and it looks like this will be the last year our 2015 championship core will stay intact. The biggest blow of all, however was the sudden and untimely death of Yordano Ventura in mid-January. For all his immaturity and anger issues, Ace was a team leader and the rock of our rotation. Like the passing of manager Dick Howser in the wake of the 1985 World Series, my Royals must soldier on in the face of adversity and tragedy.

Without further ado, my 2017 MLB forecast. I've been doing this haiku thing for a few years now, so I think my regular readers know the drill:

Comey 'Round the Corner

This presidency is turning into bad performance art. For every random declaration or misguided tweet Donald Trump delivers, the shortsightedness of his administration works its gears. This observation can be applied to a wide variety of executive orders and declarations, but it would be considered an understatement in regard to Trump's baseless allegation of wiretapping by the Obama administration. This act of unprecedented heresy proves President Trump's reliance on fringe-right "news" outlets like Alex Jones' Infowars and Breitbart.

Today's marathon hearing by FBI Director James Comey proved once and for all that our president is easily bamboozled. An exhaustive investigation proved no circumstantial evidence of wiretapping, and it only served to remind the public that the Trump campaign had some kind of contact with the Russian government during the 2016 election. (Whether that was in and of itself illegal remains to be seen.) President Trump has every right to apologize, but we won't; his supporters, gradually dwindling but still fervent, would never expect him to kowtow to anything, including the truth.

That is not to say, however that Comey is a knight in shining armor. His dangling around of Secretary Clinton's email investigation last October may have cost her the election. Conspiracy theories that suggest Comey is in cahoots with Trump are also baseless, but the ex-Republican still comes across as smarmy and self-serving. His revelations in recent months may not have redeemed him in his critics eyes, but unlike some Trump administration officials, Comey demonstrated that he is a civil servant simply doing his job.

Next week: my annual baseball preview.

The Curious Case of the Tetchy Talent

A couple of weeks ago a small, independently owned Chicago performance space --a "storefront theater," if you will-- shuttered after allegations came to light regarding the treatment of a former contributor and player. This happened less than a year after another performance space shut down shop because of egregious abuse of its actors and crew. I have nothing but respect for the people that were brave enough to be vocal about what had happened, and I believe the management of these establishments deserved what was coming to them.

These two incidents, both valuable learning experiences in how not to run an artistic venue of any shape or size, reminded me of an awkward scenario that occurred this past September. Even though I don't think I did anything wrong, I felt the need to come clean about an altercation of sorts I had with another performer:

About once a month, I send out a feeler to potential acts for the show. There was a comedian/actress I was acquainted with that was doing solo material; I was going to ask if she was interested in testing material in our show, I hadn't seen her on social media recently. I had an email address, and that was it. I sent it out with a few other candidates, and within an hour I received this reply:

Stu--I am not interested in a professional or interpersonal relationship. Please respect this and don't contact me again.

I was baffled by this reply, as was Dan my business partner, who shares the account. Dan's most educated guess was that she was weirded out because I had her email. In the time that I had been acquainted with this actress (less than four years) I had never said or done anything to suggest going out on a date, nor considered doing so. I vaguely recall sending her a LinkedIn request earlier in the year, one in a binge of potential professional connections. I never considered that I have been blocked on Facebook and Twitter, without a semblance of an idea as to her rationale for doing so.

I've only been in a handful of situations before where I had some sort of falling out with other members of the Chicago comedy community. I can think of one or two scenarios where personalities clashed, but in the other cases it stemmed from miscommunication. I make a valiant effort to treat my peers as equals, and I have never been in a situation in my eight years of performing improv where I intentionally burned bridges. I attest to my social awkwardness, but no acts of malice or deceit. When it comes to booking acts, however I go in with relatively modest expectations.

As for the actress, if she doesn't want to build connections with certain members of the Chicago comedy community, then that's her decision.  If she goes on to alienate other producers and performers, than my part was a small and passive one. I might be one of many or a very singular case, I'm not sure. If I've lost one performer, than I still have a litany of comedians, improvisers, writers, and dancers whom I can still reach out to.  This community is a rich and wonderful group, and I'm proud to be part of it regardless.