It doesn't seem like 1995 was fifteen years ago. In a way, the sights and sounds of that year --with heightened emphasis on the sounds, of course-- are just a fresh in my memory then as they are now. The death of Kurt Cobain and the fadeout of the Seattle scene a year earlier threw American alternative rock into its post-grunge period; meanwhile, the Smiths-influenced "Britpop" stylings of Oasis, Blur, and Pulp threw the UK and the US into a tizzy. The punk revival was still going strong on college radio (thanks to Rancid) and the mainstream (a tip of the hat to Green Day). Gangsta rap had reached its pinnacle as 2Pac and Biggie hit it big, while the Wu-Tang Clan, two years removed from "Protect Ya Neck," sowed the seeds of their respective solo careers. The implosion of alt-country pioneers Uncle Tupelo led to the creation of two new bands, Sun Volt and Wilco, that would eventually eclipse their predecessor's influence and decidedly modest record sales. Suffice to say, that's a lot of territory to cover for one year, though if I had to honor the absolute best albums of '95, it would look something like this:
1. The Bends, Radiohead. The album that put Thom Yorke and company on the map. Sure, their debut Pablo Honey garnered some notoriety, but name a song off the disc besides the crossover hit "Creep." This sophomore effort set the blueprint for the Radiohead we know today: cerebral anthemic rock paired with tortured lyrics and a hint of social commentary. At worst, The Bends is a filling appetizer for their 1997 masterpiece OK Computer; at best, it's a memorizing companion piece and a defining album of the decade.
2. Mellon Collie and the Infinite Sadness, Smashing Pumpkins. Initially conceived as a mid-90s answer to Pink Floyd's The Wall, the Pumpkins' third album is a two-disc tour de force. As much a concept album as it is a sonic exploration, Mellon Collie finds frontman/primary songwriter Billy Corgan saying goodbye to his youth, forcing himself to grow up while looking back wistfully at his jaded teenage years. All in all, an enjoyably challenging listen that comfortably steers clear of "double-album syndrome."
3. Different Class, Pulp. Oasis might've received more hype, but Pulp was arguably the most consistent --and cheekiest-- of all the Britpop groups. Pulp's third album blows their previous two efforts out of the water; the formula of meshing alt-pop with new wave and disco flavors didn't change much, but years of trial and error led to a more perfected product. Jarvis Cocker's songwriting has never been more catchy, nuanced or immediate.
4. 6Teen Stone, Bush
5. Wowie Zowie, Pavement
6. ...And Out Come The Wolves, Rancid
7. (What's The Story) Morning Glory?, Oasis
8. To Bring You My Love, P.J. Harvey
9. Only Built 4 Cuban Linx, Raekwon feat. Ghostface Killah
10. Tragic Kingdom, No Doubt. Another breakthrough album in a year that was quite gracious to new(ish) acts. If this ska-pop album plays like a hits compilation, you're not far off; seven of the 14 tracks were released as singles, as Top 40 and CHR radio stations squeezed 2 1/2 years of airplay out of Kingdom. Written as the band was on the cusp of imploding, the pure energy and versatility of Kingdom eclipses the departure of founding keyboardist Eric Stefani, a major creative force in the band's early days. The breakup of bassist Tony Kanal and vocalist Gwen Stefani inspired the hit "Don't Speak," one of the best kiss-off songs of the past 20 years.
Honorable Mentions: The Great Escape, Blur; Elastica, Elastica; Return to the 36 Chambers, Ol' Dirty Bastard; Washing Machine, Sonic Youth.
BEST SINGLES
"Lump," The Presidents of the United States of America
"Mother Mother," Julianna Hatfield
"Only Happy When It Rains," Garbage
"Aeroplane," Red Hot Chili Peppers
"I'll Stick Around," Foo Fighters
"Brain Stew/Jaded," Green Day
"Need You Around," Smoking Popes
"In The Meantime," Spacehog
"Gangsta's Paradise," Coolio
"More Human Than Human," White Zombie
BEST VIDEOS
1. "It's Oh So Quiet," Bjork.
2. "California," Wax. Spike Jonze' mid-90s winning streak was still rolling with these top two picks. "Quiet" is a modernized interpretation of Betty Hutton's '40s hit "Blow a Fuse," while "California" is probably the most intense slo-mo clip even shown on MTV.
3. "Just," Radiohead. Wait, what did he say?
4. "I'll Be There For You," Method Man feat. Mary J. Blige.
5. "Waterfalls," TLC.
Honorable Mention: "Ironic," Alanis Morrissette.
Your thoughts?
Posted by Stuart A. at 8:16 AM 1 comment:

Oh Well, It's Better Than Nothing

Earlier today Mullah Abdul Ghani Baradar, the top military commander of the Taliban, was captured in a joint CIA-Pakistani operation outside Islamabad. While this is a major breakthrough for the American presence in southwest Asia, this still poses a troubling question: how many top-ranking Taliban military commanders are there? You'd think we'd captured 30 or 40 of them by now. Who would want a job with that much turnover? It's like on "24" when Jack Bauer et al. spend eight episodes hunting down one villain, and initially there's little to no evidence that he's in cahoots with anyone else, yet this bad guy turns out to be the scapegoat for an even larger conspiracy.

Baradar's capture is a signifigant success for President Palmer --er, I mean Obama-- whose ramping up of American troops in the region was met with apathy and trepidation by the usually hawkish GOP. Former Vice President Cheney just keeps attacking and nitpicking Obama's foreign policy, when in fact he might be exposing a repressed inter-party squabble over George W. Bush's war tactics. As Peter Beinart suggests, the biggest war liberal since JFK has been even more aggressive about fighting terrorism overseas than his two predecessors ever were. Where Obama's domestic policy has lost steam, his war chest is slowly finding its footing. Even so, at times it feels like the War on Terror is one big Whack-a-Mole machine, but Baradar's capture is a sign of progress; I don't know if this will get us any closer to hunting down Osama bin Laden, though I'd like to hear whatever intel that Baradar offers.

+ Apparently, a Saudi prince now has a minority share in the Fox News Channel. This lady's article has been sprouting up all over the internet, whining about a growing "Arabic influence" in the mainstream news media. Can't anyone stop to savor the irony of all this?

+ I didn't realize this until late Saturday night, but apparently Valentine's Day, Presidents' Day, Mardi Gras, and Ash Wednesday all land on consecutive days this year. Has that ever happened before?

+ I end this week's missive on a positive note: I got published again! My article on one-armed St. Louis Browns outfielder Pete Gray will be in the Spring 2010 issue of Nostalgia Digest. This is my fourth article for the magazine, following essays on Fleer Trading Cards, the 1947 Chicago Cardinals, and the man that attempted to steal the Stanley Cup. To pre-order your copy, just follow this link.

It's (Still) In The Cards 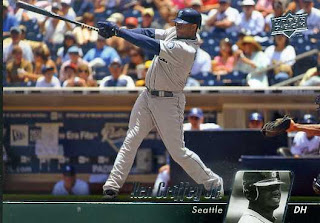 As a sports card collector, I'm feeling some trepidation about the coming year. Last week, Topps began their first year since 1980 as the sole manufacturer of MLB-liscensed baseball cards. It won't be a flashy start to the year, it's merely Series 1 of their base brand release, though it's the first harbinger of all the sweeping changes that rocked the card industry last year. For those of you who don't follow trading cards anymore, here's a short recap:
In March, the Panini sticker company was granted an exclusive licensing deal by the NBA, and shortly afterward they bought out Donruss so they wouldn't have to start their trading card operations from scratch. In August, the MLBPA announced that because of the shrinking market only one company would produce baseball cards for the 2010 season; after a contested battle, Topps got the nod over Upper Deck. Three months later, the tables were turned when the NFL denied Topps' offer to produce football cards in 2010, leaving UD and the newly christened Panini America as the sole manufacturers in that category. Later this year, the NHLPA's exclusive deal with Upper Deck will expire, leading many to suggest that Topps might re-enter the hockey fold after a six-year hiatus.
While all this tightened licensing will result in fewer options on the market, I won't have as many headaches keeping track of the myriad number of brands that come out every year. Nevertheless, the jilted parties are improvising; Upper Deck may no longer have full MLB licensing, yet they're still releasing a handful of baseball products this year, albeit with no mention of team names (i.e. "Matt Kemp - Los Angeles (NL)") and obstructed logos in lieu of chintzy airbrushing (see above). In reality though, it's hard to tell who the real winners and losers are; every major company has whittled their product line down to one or two sports (to stay afloat, Topps also makes UFC trading cards). I wouldn't call it the death of a hobby, though I can't imagine anyone is benefitting from all this consolidation, either.
Other notes:
+ Very few things can make me shout "What the hell?!?!" in a public setting. This would be one of them. Luckily, I was in a crowded bar at the time, so my rare outburst barely even registered.
+ Was it a mistake to not mention the Lt. Governor's race in my Illinois Primary blog last week? I didn't vote for Scott Lee Cohen, yet I still feel blindsided by these shocking allegations. His press conference Sunday night was held in a pizzeria, evidently symbolic of the level of class and grace he showed while he tried to salvage his campaign. Good luck to the Illinois Democratic Party as they find a running mate for Governor Quinn that doesn't wear their checkered past on their sleeve.
+ Just a friendly reminder that pitchers and catchers report in one week.
Posted by Stuart A. at 8:00 AM 6 comments:

My Unofficial Guide to the 2010 Illinois Primary 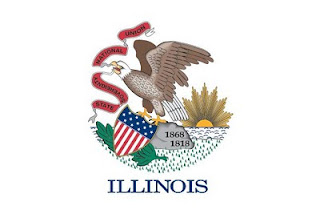