Public opinion is starting to sway toward reopening. That's not to say we're ready by any means; the United States is collectively fatigued after 10 weeks at home. The threat of COVID-19 hasn't gone away --I'm going to keep repeating that-- and states that have reopened have all seen spikes in cases and deaths. People are fighting on social media and in real life over wearing masks. These bold and brazen folks are calling us fraidy-cats. We're only thinking about ourselves, not others, and especially not the immuno-compromised. Illinois still has stay in place, but the governor is buckling.

Admittedly, I'm getting rather bold myself. At first, I was limiting driving for Lyft and Postmates to two, maybe three nights a week. With my unemployment benefits lapsing in two weeks, I'm hesitant to keep dipping into rainy day money. I'm waking up a little earlier, trying to get more stuff done around the apartment in daylight, then go out driving just in time for rush hour. Unless businesses completely reopen (that is to say, are safe to reopen) this is pretty much my life for the next three months.

My latest concern is whether I can afford to stay in my apartment. I'm 6 1/2 months into a one-year lease. Unemployment benefits from the state would help somewhat, but I don't want to face that ordeal again. My roommate is a furloughed cook; he leaves the apartment maybe once a week, and he's practically paying rent as a loan shark. (More on that later.) My sister's best friend and tenant is mostly back at her parents' house; her father died suddenly in early May, and her mother is immuno-compromised. Whether she stays at my sister's house remains to be seen. I still drive out once a week to pick up mail, see the dogs, and soldier on with our never-ending cleaning project. I feel guilty, as if making the 40-minute drive is a wasteful luxury.

I had a particularly strange Lyft ride last Friday night. I picked up this passenger less than half a mile from my apartment; he wasn't wearing a mask, and almost immediately after he got into the car, he asked about "Plandemic." For the unfamiliar, "Plandemic" was a documentary uploaded to YouTube that reinforced several unfounded conspiracy theories about COVID-19. It's been removed and uploaded back to YouTube multiple times in the last week, citing misinformation rules. I saw the video, I know it's nonsense, but he thought it "made you think." I asked politely if he could change the subject, but he persisted. I hate that I had to snap at him, but I did what I could to avoid a more heated argument.

People are getting restless, but there's little we can do. That notorious curve isn't flattening. The death totals aren't tapering off, either.  The health experts aren't giving any indicators that the US as a whole is making progress in the COVID-19 fight. Misinformation is spreading as fast as the virus. The federal government's response has been (to put it mildly) slow, feckless, and unhelpful. Other countries have recovered while the U.S. population bickers over haircuts. Theaters of any kind likely won't open until late in 2020, which puts my weekend job on the kibosh.  Wisconsin reopened, probably too soon. There's no timetable for anything else.

There's a sliver of hope, though: baseball will be back. Two-plus months without this sort of diversion has been rough. I'm acclimated to going to a bunch of games during the spring and summer, but I can handle only watching baseball on TV. (I've haven't bothered to stay up to watch Korean ball, an ESPN "exclusive.") Otherwise, it looks like the rest of our summer has been cancelled. Fatigue has undoubtedly kicked in, but there's little we can do. We just have to persist.

I'm taking a breather from essaying about life in quarantine to discuss something personal:

I don't normally broadcast this out of fear of jinxing myself, but I had a job interview in Schaumburg on Thursday. I thought it was going to be a phone interview, but I was asked to drive out for a socially distanced sitdown. (Yes, it's essential work, and I can't elaborate further.) It occurred to me while driving out of the city that not only was my interview one town over from my old office, it was on the 10th anniversary of when I was replaced.

Four months ago on Facebook, I wrote a lengthy post comparing and contrasting where I was in 2010 as we approached the new decade. I discussed my last radio gig, but not what led up to losing my job. To sum up another long post, I had my EOE-obligated job interview on February 8th, then spent the next 11 weeks waiting for a decision that was supposed to take 14 days. I discovered by accident that at least two rounds of interviews were held without my knowledge. During my last week in the office, I noticed people were strangely avoiding me, and Administrative Professionals Day came and went without a mention. I was the receptionist, for chrissakes.

On April 30th, I was summoned to the business manager's office. It was about 90 minutes before the office closed for the weekend. The manager informed me that after some deliberation, it had come down to me and another candidate... and they went with the other candidate. This business manager, someone who made absolutely no effort to get to know me in the time we shared an office space, watched disdainfully as I clean out my desk. The traffic/billing manager --my actual boss-- escorted me out to the parking garage while fighting back tears.

The timing was awkward, to say the least. I had my Level E (graduation) show at Second City the next day, and I had mentioned that to people in the office. None of my now-former co-workers showed up, and even though the show went okay, I felt numb. The next day, after my last training center class, some of us went out for drinks across the street. I had a train to catch, so I only stuck around for a half-hour. Before I left, I said thank you and farewell to my classmates before noticing that my voice was quivering. I noticed then and there that I was waking up the next morning to nothing. As I walked from Corcoran's Bar to Sedgwick Brown Line, it was my turn to fight back the tears.

That was what was on my mind after my job interview on Thursday. Inexplicably, one decade and another ratings quarter on the outside looking in, the management at my old station hasn't changed. A number of other people, including my old direct superior were forced out for myriad reasons. Almost everyone I've been in touch with had comtempt for the general manager, but especially that business manager. The corporate office in Camarillo, CA couldn't care less who's in charge as long as the Chicago branch is turning a profit. Maybe its more symptomatic of commercial radio in general, but the cutting of corners to stay in the black is absurd. Six different people have come and gone in my former position, no one lasting more than 2 1/2 years.

As time has marched on, I've only grown more embarrassed to have ever worked for Salem Media Group. It's just another outlet for right-wing misinformation, something I barely tolerated in the late 2000s that I can't bring myself to listen to now. The same people that are encouraging armed protests against stay-at-home orders, that insinuate Jewish elected officials are somehow Nazis, are stirring outrage over temporary inconveniences, that gloss over President Trump's failures. They are (albeit indirectly) enablers of unnecessary chaos, gaslighters of the highest order. 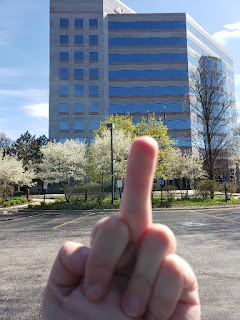 So, while I was in the neighborhood, I took a selfie of myself flipping the bird at my former office. I figured it was the least I could do.

Clearly, I'm not ready to forgive. I don't know if I ever will be. I'm a bit more pragmatic than I was 10 years ago. I did everything I could to not burn bridges, but things have grown too dire and too polarized. My work situation is imperfect (for now) but I've made peace with the fact that I'll probably never work in radio again. I'm too out of the loop. Someday, I hope to write a book about my time in radio, with a plot structure not unlike "Gulliver's Travels." My two years at Salem were going to be the last chapter of the book. Unlike Swift, I'm grasping to find any kind of happy ending.